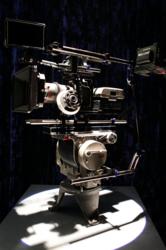 World renowned cinematographer, Shane Hurlbut, ASC, (Terminator Salvation, The Greatest Game Ever Played, Drumline) has teamed up with camera accessory manufacturer, Letus Corporation, to produce a line of products designed to give DSLR cameras the form factor Hollywood filmmakers have been using since the 1950’s. After months of development, the Shane Hurlbut Master Cinema Series has been released to the market.

As one of the first in Hollywood to embrace the power of video capable DSLR cameras, Hurlbut quickly became known for his visceral images using a camera small enough to be positioned in creative spaces. Hurlbut and his core crew, the “Elite Team,” began developing a system of shooting with DSLRs that enabled him to handle the camera like a 35mm Panavision setup, but at a much reduced weight.

Hurlbut had a vision for using the DSLR camera and enlisted the help of Hien Tu Le, owner of Letus Corporation. Together, they collaborated on a radical approach that alters the way a DSLR is handled for filmmaking. This equipment is designed and priced for every filmmaker to enjoy, no matter what the budget. Whether someone is lensing a wedding, documentary, music video, commercial or a full-length feature, this is their form factor. Hurlbut and Letus have married 20 years of movie making experience, along with 4 years of DSLR photography into one powerful rig.

Letus has prototyped and manufactured 16 individual components for Hurlbut’s Master Cinema Series system. The complete system morphs from one form to another effortlessly and converts into 4 specific configurations: Studio Cam, Shoulder Cam, Man Cam, and Action Cam. They have designed a forward thinking rig series to maximize your investment because it will work with future DSLR camera models.

Hurlbut Visuals, a Los Angeles-based DSLR rental house and production company was started by Lydia and Shane Hurlbut, ASC to create, innovate and educate filmmakers around the globe. It began as a way for Shane to share his many years of cinematography experience in both features and commercials to inspire one filmmaker at a time. The Hurlbut Visuals team has attracted industry visionaries, expanded to include joint ventures focused on new technology and generated unique opportunities in production.

Letus Corporation was founded in 2006 to provide camera accessories to the film and television industry. Starting with 35mm adapters, Letus quickly became known for being a top provider for quality camera add-ons. Letus continues to design and produce products for the motion picture industry and will continue to work closely with Hurlbut Visuals on future accessories. For more information on the Master Cinema Series, please contact Aaron Pinto at 866.620.3566. You may also visit the official site at http://MasterCinemaSeries.com.

Shane Hurlbut, ASC demonstrating Man Cam rigThe Man Cam rig was used extensively in productions such as the film "Act of Valor". It produces a visceral image that hard to match with any other system.

Shane Hurlbut explaining the Letus Master Cinema SeriesShane describes the Studio setup and how uses it on productions.