The newest cookbook from Lidia Bastianich will hit the bookstores on Tuesday, October 20. A fifteen-city book tour is scheduled. 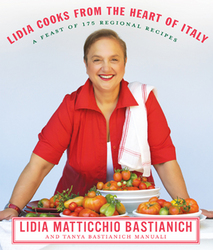 The companion cookbook to the third season of Emmy-nominated Lidia's Italy hits bookstores on Tuesday, October 20. "Lidia Cooks from the Heart of Italy," the sixth cookbook of practical, authentic Italian recipes, is poised for a 15-city tour, accompanied by its author Lidia Bastianich. Lidia's Italy also announces the September release of its third season.

In honor of the release of the new series and book, a new 90-minute DVD is now available. "Best of Lidia" features delicious, easy Italian recipes from previous seasons of Lidia's Italy.

The celebrity chef has been inspiring many on television with affordable but authentic Italian recipes and Italian-American cuisine since 1998, but she has been sharing Italian cooking recipes and prepared dishes with many more much longer. The first Bastianich restaurant (Buonavia) opened in Queens in 1971. Today, many successful restaurants and cookbooks later, Lidia and the staff of Lidia's Italy continue to share Lidia's Italian recipes with the world.

"We are so excited about the launch of 'Lidia Cooks from the Heart of Italy.' Created as a companion cookbook to the third season of Lidia's show, it explores the local food and artisanal traditions of Lidia's favorite places in Italy," explains spokesperson Lauren Falk.

"Lidia Cooks from the Heart of Italy" was compiled by Lidia and her daughter Tanya Manuali. It reflects little-known regions of Italy, highlighting regional flavors and traditional techniques. As such, it serves both as a source of Lidia's Italy recipes and as a kind of travel guide.

Those interested in a signed copy of the cookbook can visit the Lidia's Italy website for the tour schedule. Lidia will make her first book tour appearance on October 18 on QVC, followed by the Today Show on October 20. Following, Lidia will be meeting her fans, signing copies of the new collection of 175 practical, easy Italian recipes, and cooking up dishes from the new series.

Lidia and Grandma on "Lidia's Italy"