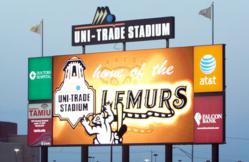 The Uni-Trade Stadium project is another example of Lighthouse’s dedication to being a part of high-quality venues and sports of all levels.

Uni-Trade Stadium is an $18 million state-of-the-art multi-use stadium located adjacent to the Laredo Energy Arena on Sinatra Drive in Laredo, Texas. The stadium’s architect and design team is Dallas-based HKS. HKS was the architect of record for the new Dallas Cowboys Stadium. The capacity for Lemurs baseball games is 6,000 and capacity for concerts is 16,000. Stadium amenities include a built-in concert stage above the centerfield wall, 9 luxury suites, grass berms, the Lighthouse LED video board, three private picnic areas, three private party areas and a Stadium Club located on the suite level.

“Working with TS Sports on Uni-Trade Stadium,” Ed Whitaker adds, “is another example of Lighthouse’s dedication to being a part of high-quality venues and sports of all levels. We’re looking forward to entertaining Laredo fans during Uni-Trade Stadium’s inaugural season.”

Lighthouse is a leader in LED video display technology that develops, manufactures, and markets LED video solutions for multiple indoor & outdoor applications, media & entertainment events, and sports arenas across the globe. With numerous technological breakthroughs to its name, Lighthouse has established itself as a multi award-winning leader in the LED video industry that holds itself to the highest standards of quality.