Religion reporter Christine Wicker tells the story of the world's largest spiritualist community in Lily Dale: The Town that Talks to the Dead. The small upstate New York town is now the subject of an HBO documentary, "No One Dies In Lily Dale" which debuts July 5th. 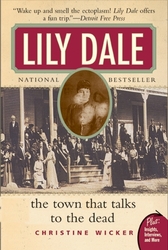 Lily Dale: The Town that Talks to the Dead by Christine Wicker

Both funny and poignant, Lily Dale illuminates the universal longings for love and connection that have drawn visitors such as Harry Houdini, Susan B. Anthony and Mae West.

Each year, twenty thousand visitors travel to Lily Dale, the oldest and largest community of Spiritualists in the world. The main attraction of this New York State Victorian village is to consult one of the town’s 450 mediums. In Lily Dale: The Town that Talks to the Dead(HarperOne; Paperback; 288 pages with photo insert), Christine Wicker, an award winning and wry journalist, captures the life and spirit of the 122-year old city populated solely by people who believe the dead live among them.

Both funny and poignant, Lily Dale illuminates the universal longings for love and connection that have drawn visitors such as Harry Houdini, Susan B. Anthony and Mae West. Wicker provides a wonderful history of this quirky religion while she investigates Spiritualism and the claims of its practitioners. Lily Dale tells the story of the town and the people who believe in spirits, offering what is ultimately a moving portrait of belief. Tender but truthful, Wicker depicts the desires for meaning and contact beyond the grave, and shows us all, in the end, that it doesn’t matter what we believe, it’s belief itself that transforms us all.

The town has now become the subject of an upcoming HBO documentary titled “No One Dies in Lily Dale” which spotlights some of the town’s registered mediums and recent visitors from the outside world who come to Lily Dale seeking closure after the passing of loved ones. The documentary brings to the screen the town’s most unusual residents. For a comprehensive perspective on one of America’s most fascinating places, the book, though not affiliated with the HBO film, is an excellent companion to viewing.

About the Author
Christine Wicker has won numerous awards for her journalism including the Clarion Award, the Wilbur Award, the Sunday Magazine Editor’s first place for feature writing and seven first place prizes from the Dallas Press Club. She was a long-time religion reporter for the Dallas Morning News and is the first reporter to write a book on Lily Dale, a town that less than a decade ago refused media access. She is a current contributor to Parade Magazine.

Lily Dale: The Town that Talks to the Dead
Christine Wicker
HarperOne, an imprint of HarperCollins Publishers
Fall 2006
Paperback / ISBN: 9780061153747

“Lily Dale is a real place, and a fascinating one, as author Christine Wicker learned during the several years she spent researching her thoroughly engaging nonfiction book ‘Lily Dale’.” The Cleveland Plain Dealer

“(W)ritten with verve and humor, not to mention a reporter's skill in the art of people-watching. Wicker fills each page with anecdotes of ghosts, ghoulies and folks who go bump in the night. By the time we leave this odd town, we know what the author knows. That the road to enlightenment takes many a detour, and one just may lead down Main Street, Lily Dale.” Milwaukee Journal-Sentinel

“Christine Wicker, a Dallas Morning News religion reporter, made no attempt to hide her intent to write a book addressing the question: Are spiritualists good people who help others or are they cold-hearted deceivers gulling the weak? The result is the engrossing new book, Lily Dale: The True Story of the Town that Talks to the Dead.” BookPage

“Although the book details the town’s story, Wicker uses its history merely as a framework to explore more slippery topics, e.g., the nature of faith, the value of belief and the need for solace. She explores these areas through the stories of those who visit Lily Dale annually, craving a few insightful words about deceased family members or hoping for a premonition about romances, careers or children. Some of the tales are sad ones, but Wicker’s jaunty pacing and humor keep the work from growing too dark and leave the reader with a feeling of tenderness, rather than pity, toward her subjects. She also weaves in stories of trickery, giving the tales of otherworldiness a nicely earthbound counterpoint. By the end, Wicker feels subtly changed, and she offers no answers as to why that might be or how long it may last. This lack of resolution is refreshing, however, and wonderfully fitting for a book about the mystery of faith.” Publishers Weekly

“Baptist by upbringing and a respected religion reporter for the Dallas Morning News, Wicker writes that “a good way to judge a religion’s validity is by the effect it has on people’s lives.” She went to Lily Dale to find out what the residents were like: wacky? Forerunners of New Agers? She arrived as a skeptic and left still somewhat doubtful but with a surprisingly open mind. Whether or not one accepts the existence of the supernatural, the resulting book is a very good read.” Library Journal

“Wicker is at her best when she focuses her considerable knowledge on analyzing the spiritualist movement in its wider religious and social contexts. She also has a wonderful eye for detail and makes all of the characters—including the town itself—come to life, right before our very eyes.” Body & Soul Magazine