Linzi Stoppard & Ben Lee, aka FUSE, Add A Shot Of Rock To The Chivas Global Campaign "Live With Chivalry" 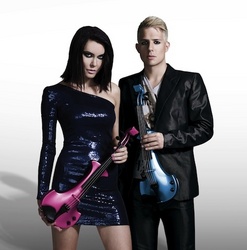 The Benchmark for Electric String Groups Has Just Been Raised

With their original sound and approach FUSE are the most innovative string act around today. Pioneering a new method for a traditionally classical instrument while inspiring a new breed of electric violinists. FUSE are setting the bar.

What FUSE do can have a truly global appeal; there are no language barriers. Whilst they are very proudly a string band, listeners can sing along to the choruses that we all know. With the release of their eponymous album in March 2010, FUSE will be bringing their unique brand of entertainment to a whole new audience, let’s hope they are ready!

FUSE are critically acclaimed electric violinist Linzi Stoppard and Ben Lee. At the end 2007 Linzi formed electric string group, FUSE, with fellow electric violinist Ben. A graduate from the Royal College of Music, Ben is known for his musical arrangements and performances for artist such as Arctic Monkeys, Kaiser Chiefs, Mark Ronson, Amy Winehouse, UNKLE and Massive Attack to name a few.

The duo harness their bespoke gold-coated Kevlar Carbon-Fibre signature Bridge electric violins and seize classic Rock tracks and put them through the FUSE wringer! The results are radical, innovative but loving reinterpretations for violin. All tracks have been reworked and reanimated in the unique FUSE way. Linzi and Ben have had to invent new ways to render melodies that were vocal on the original tracks. FUSE aim to prove that the electric violin can be as versatile as the electric guitar - a valedictory romp through "I Love Rock N Roll" seems to seal the deal!

And when FUSE perform they bring their distinctive sound to their audience, using the same elements to reproduce the experience live - once again setting FUSE worlds apart from all other string acts and in the process rewriting the tired stereo-type, breaking old records and setting new ones. For the truly "original and most innovative string act for over a generation" there is no substitute for FUSE.

As part of the Chivas "Live With Chivalry" global campaign FUSE put in an electrifying performance at a secret VIP party at Villa Mercedes, Athens, Greece. This amazing venue is brainchild of Greek club mogul and DJ, Vassili Tsilichristos. Glamorous and aggressively upmarket, it's the place to head for a delicious meal out under the setting sun on their stunning terrace. Later, the glossy, well-groomed crowd head to the dance floor. Décor is on the grand side, the ceiling dripping with chandeliers and the walls draped in fabric.

The "Live With Chivalry" campaign aims to revive the values of chivalry by encouraging us to live life with honour, loyalty and gallantry. New independent research published to coincide with the launch "Live with Chivalry" indicates this campaign is well timed. Global concern regarding the erosion of values is high and the overwhelming feedback is that friendship, loyalty, honour and intelligence are prized within societies around the world…95% of all men and women surveyed said they found chivalrous qualities attractive in the opposite sex.

The majority of respondents cited "helping others" as their last chivalrous deed. The predominant number of male respondents ranked intelligence, confidence and honour as traits that most represent their sense of masculinity today.

Opinion leaders also share these viewpoints. Dylan Jones, Editor of GQ Magazine & of 'Rules for the Modern Man' explains: "Behaving in a chivalrous fashion today is a signifier that you have a greater level of intelligence".

"Live with Chivalry" is therefore stronger than simply an act. It is about staying true to your word and leading by example, standing up for what you believe in no matter what.

Chivas Regal is the flagship Scotch whisky brand of Chivas Brothers.
Chivas Regal is a truly global brand, selling 4.5 million 9L cases annually in over 200 countries (more than a bottle sold every second) - its highest ever volume sales. Chivas Regal has achieved a strong global performance - No 1 in Europe and Asia, with dynamic growth in Eastern Europe, South America, and most emerging markets.
The Chivas Regal range is the epitome of style, substance and exclusivity and includes Chivas Regal 12, 18 and 25 Year Old.

The Signature of Rock Electric Violin

FUSE's passion and vision challenges convention"...most anticipated album of 2010, setting the bar for a new breed of violinists

The Most Innovative String Act For Over A Generation...FUSE - Linzi Stoppard & Ben Lee's live performance and sound are pioneering the advent of a new violin dawn..