Minneapolis housing inventory numbers released by the Dept of Numbers and the Minneapolis Area Association of Realtors both confirm the Twin Cities months supple of available homes for sale falls well below comfortable levels and national averages. Home Destination, a Minneapolis residential Realtor with RE/MAX Results, comments on the housing inventory reports and the great opportunity it gives for sellers to list their homes for sale. 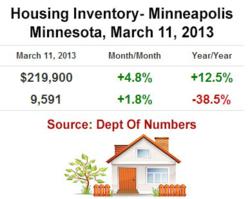 Minneapolis, Minnesota inventory of available housing units for occupancy hits its level lowest of housing inventory in ten years. According to the National Association of Realtors (NAR), 1.74 million homes are currently on the market, but considering the shorter sale time it takes to sell a home, nationally housing has fallen under a comfortable four months supply level. Minneapolis has hit a ten year low with only a scarce 2.9 months supply.

"W are receiving inquiries for Minneapolis area listings like we haven't seen in years. Home buyers seem better prepared to buy this spring, more are beginning the process of buying a home with a quality loan already in hand, ” said Jenna Thuening of Home Destination. “We hope more real estate sellers will take advantage of their seller's market to meet the strength of buyer demand.”

On a national level "housing inventory for all metro areas tracked, peaked at 1,560,162 in October 2007. The lowest housing inventory level seen was 648,938 in January 2013. As of March 11 2013 there were about 669,861 single family and condo homes listed for sale in the 54 metro areas we track. Since this time last year, the inventory of homes for sale has decreased by 22.7% and the median price has increased by 5.0%," states the Department of Numbers website.

Twin Cities homes sold for a higher median price during 2012 than in 2011, finishing February with the 12th consecutive month of increases. This is a significant milestone demonstrating a real and sustainable real estate housing recovery. "Several patterns continued from 2012: pending purchase activity was up, new and existing housing supply levels were down, prices were higher and distressed market activity eased," according the Minneapolis Area Association of Realtors.

As of March 11 2013 approximate 9,591 single family homes and condo units were listed as homes for sale in Minneapolis Minnesota. The median asking price of Minneapolis houses listed was $219,900. Within the same given time period last year, the Minneapolis inventory of homes for sale has decreased by 38.5% and the median home price has increased by 12.5%. That tallies a month to month increase of 1.9%, and a slight increase from the previous week of 9,415 listings.

Traditionally, the housing market sees a clear seasonal pattern for house inventory, with the low point for inventory in late December or early January, and its high point coming in late spring to summer.

Key findings on national housing inventory levels that Home Destination Sees In The Dept Of Numbers Report Include:

If the Twin Cities keep up the same home sales pace, developers and home builders may be compelled to develop empty spaces into zones that are multifunctional and include residential purposes. Jenna commented, "Today, more residential single-family home are incorporated into mixed-use developments where residential neighborhoods bring diversity to lifestyle centers and commercial zones. This is a contributing factor in why there is a steady rise in the sales of Minneapolis townhomes and condos".

The MAAR believes that stronger confidence and less economic uncertainty in the Twin Cities is encouraging more seller activity, as is expected to increase the supply of homes for sale. "There is evidence this is improving, as traditional seller activity has been on the rise lately," says MAAR.

Even though the number of available homes is down from last year, it indicates market adjustment. Inventory tightness in the Twin Cities has contributed to increases in home values. "As home values rise, the negative equity held by homeowners decreases, releasing trapped potential sellers in underwater mortgages to a position of positive equity that allows them to finally sell their homes. Families feel free to move up or to downsize, as they wish, when they can recover more than the mortgage owed," adds Thuening.

Potential real estate sellers in the Minneapolis metro area that are considering selling their home can reach Home Destination at 612-396-7832. Whether it's helping a home buyer negotiate an offer or helping a seller with effective marketing, a skilled Realtor ensures success.

Low Housing Inventory Levels In Minneapolisfrom the Dept of Numbers

The Skinny On Minneapoois Housing Inventoryby the Minneapolis Association of Realtors