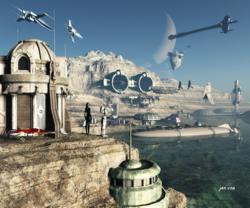 Jon Eno of Bluff Dale, Texas will be honored at the 29th Annual L. Ron Hubbard Achievement awards being held on Sunday, 14 April 2013 at the Wilshire Ebell Theatre in Los Angeles. The event will celebrate the twenty-four annual winners in the L. Ron Hubbard Writers and Illustrators of the Future Contests, where Luis was one of the twelve illustrator winners. His art will also be published in the bestselling Science Fiction and Fantasy anthology series – L. Ron Hubbard Presents Writers of the Future Volume XXIX. He has been already been awarded the $500.00 prize money for the win.

He will now compete with the remaining 11 winners for the grand prize of an additional $5,000.00.

Jon will be flown to Hollywood and participate in a week long workshop taught by the contest blue ribbon panel of judges lead by Cliff Nielsen (Chronicles of Narnia artwork), followed by the gala awards ceremony at the end of the week.

Other judges and mentors that will work with him during the week are Gary Meyer (original Star Wars concept art), Stephen Hickman (internationally commissioned artist) and Vincent DiFate (NASA artist) just to name a few.

The Contest was initiated by L. Ron Hubbard in 1983 shortly after returning to the field of science fiction with his bestseller Battlefield Earth.