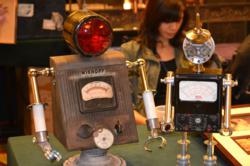 I was surprised to see so many famous authors walking around. Every one of them were very approachable. I just love talking to creative people. It gives me ideas too.

Science fiction/fantasy fans and authors explored the subject of steampunk versus zombies, amongst more scientific ideas at this year's festivities at the 39th annual Los Angeles Science Fantasy Society convention on Thanksgiving weekend at the LAX Marriott. The annual panel hosted by the L. Ron Hubbard Writers of the Future contest included judges Todd McCaffrey and Laura Freas and several past winners of the contest, including 1991 Grand Prize winner James C. Glass, 2010 Grand Prize winner Laurie Tom, winners Brennan Harvey, Ryan Harvey and Scott T. Barnes. All participated and encouraged want-to-be writers and illustrators to enter the contest as often as they can.

In the Con's formative years, members included some of science fiction’s biggest names: Ray Bradbury, Robert Heinlein, L. Ron Hubbard and A.E. van Vogt. The club itself was founded in 1934 making LASFS the world’s oldest and continuously-meeting science fiction and fantasy club. Through the years famous and now current bestselling writers in the field continue to attend, such as Steven Barnes, Gregory Benford, John DeChancie, David Gerrold, Todd McCaffrey, Larry Niven, Jerry Pournelle and Tim Powers. They have all become regulars at the Con.

"I was surprised to see so many famous authors walking around," stated Phil Proctor, co-founder of the Firesign Theater and special guest speaker on Saturday. "Every one of them were very approachable. I just love talking to creative people. It gives me ideas too."

"I learned how to survive in the wilderness in the event of any kind of invasion," said Michelle Pincus, a regular attendee "which I wasn't expecting to find out when I walked in the door."

"We saw brisk booksales at this convention, the best ever in fact, and we didn't even have a black friday special", said Sarah Toth, bookseller for Galaxy Press, US publisher of L. Ron Hubbard's fiction works. She was also selling donations for the Toys for Tots toy drive, sponsored by the U.S. Marines, of which this year's toys and books will go to needy children suffering from hurricane Sandy.

For more information on the Writers of the Future contest and how to enter, go to http://www.writersofthefuture.com.