Lumie Provides the Dawn of a New Day

Ahead of the clock change at the end of October, new figures released by Lumie reveal how people are affected by the change of season and by their alarm clock. 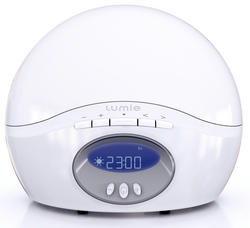 As the science of sport becomes more important in improving performance, published research into light therapy has shown how it can contribute to helping enhance the team’s biological rhythms naturally, so they start every day in the best possible way.

To support the launch of its new dawn simulator Bodyclock Active, Cambridge based light therapy expert, Lumie, today unveil findings from its recent Winter Survey. The survey, conducted on a sample of 3000 respondents (which equalled a true representation of the UK population), revealed a staggering 94% of people get annoyed by their alarm clock at this time of year. Others also said they were more generally affected by the change of season; staying in, gaining weight, eating comfort foods and being less productive at work.

With the clocks going back at the end of this month, we move that one step closer towards the dark depths of winter. Once the seasonal time change has occurred, light levels outside take a sudden dip leaving much of the nation feeling the after effects for months as result of commuting to and from work and waking up to the shrieking sound of an alarm clock in darkness. For some, the drop in available light levels becomes so unbearable it disrupts their day to day lives and causes considerable amounts of stress – these people suffer from SAD. Others complain of much milder symptoms and take a general disliking to winter, these are suffering from the winter blues.

According to previously released statistics revealed by Lumie, SAD affects around seven per cent of the UK population and the winter blues a further 17 per cent. The new survey reveals a much larger percentage of people are affected by the change in season:

*Further statistics can be offered by Lumie,if required

It also exposed that as many as 94% of people say their alarm clock annoys them more in winter, others said the mere sound of it makes them want to snuggle deeper under their duvet and stay in bed for another hour:

One way to help make winter days and dark morning starts feel more bearable is to use light therapy. Light is a natural stimulant and helps people feel positive, upbeat and full of life. It's also an important factor for our overall physical well-being as it keeps our circadian rhythm on track so that our daily rhythms (i.e. when we eat and sleep) and mood are aligned.

Readily used by SAD and winter blues sufferers, light therapy is scientifically proven to help alleviate symptoms. As the survey shows, light therapy could also be used to help many more – especially those in need of an extra energy boost or a helping hand waking up feeling alert on dark winter mornings.

British Swimming provides a prime example of how healthy and fit individuals have benefitted from light therapy. Through the winter of 2009/2010, athletes were provided a Lumie Bodyclock dawn simulator to help wake them up for early training sessions and competition. One year on, feedback has been extremely positive:

Andrew Logan, Sports Science Manager, British Swimming, said:    “In Olympic sports like swimming, we are constantly looking for innovative ways that can help make the difference between taking home a medal or missing out altogether.

“As the science of sport becomes more important in improving performance, published research into light therapy has shown how it can contribute to helping enhance the team’s biological rhythms naturally, so they start every day in the best possible way.

“In general, for other sporting athletes and the wider population who arise early in the dark, light helps to kick start the body by setting it in motion for the rigors, so to speak of the day ahead.

“Just as we consider the right food types to fuel our athlete’s, why not consider natural applications like light therapy? If we look at the overall bigger picture, all of these little differences could work together and benefit the swimmers, providing them with competitive edge that could earn them a gold medal.”

Jonathan Cridland, CEO of Lumie, said: “We have specialised in manufacturing light therapy treatments for the past 19 years and know what we’re doing. In 1993, we invented the first ever dawn simulator (or wake up light) with the first of our Bodyclock range so that everyone could feel the benefits of waking up to light all year round.

“As the innovator of dawn simulators, we have years of experience and customer feedback to ensure our products are the best. The launch of new Bodyclock Active highlights how our product range has grown and we are extremely proud of how far we’ve come.

“Overall, as well as providing effective treatments to SAD and winter blues sufferers, we want to educate the wider population as to how light therapy might be of benefit to them, too.

Should you require additional statistics from the Lumie winter survey, please contact the Lumie press office directly. Further details about Bodyclock Active can be found attached to this press release.

The Lumie press office is also able to provide more information on SAD and the winter blues, access to scientific research papers, case studies and comments from academic experts. Please call either 01954 780 500 / 07876 798 718 or email lindsay(at)lumie(dot)com

About Lumie:
Cambridge-based Lumie offers over 19 years experience and expertise in light therapy and only light therapy and were the first company to manufacture dawn simulator wake-up lights with our Bodyclock range, so that anyone could feel the benefits of waking up to light all year round.

As Europe’s leading light therapy specialist, Lumie offers a wide selection of products, including Bodyclock dawn simulators, lightboxes, visors and LED treatments, all of which are certified as a medical device and are available to customers on a 30 day home trial.

Based on scientific research, Lumie has lights for skincare, the treatment of mood and circadian rhythm disorders such as Seasonal Affective Disorder (SAD) and sleep issues, and for the relief of allergies like hay fever.

Working in association with leading experts in Dermatology, Psychiatry and Chronobiology, Lumie has earned the respect of the medical profession by innovating products that are based on new developments in scientific research and clinical trials. Lumie is a massive success in the mainstream health and wellbeing arena and prides itself on providing the highest level of personalised care to customers by offering knowledgeable, friendly advice through its customer care team and via its internet forum, http://www.lumie.com/forum.