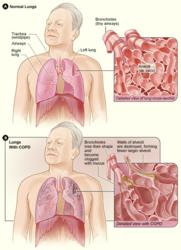 COPD (Chronic obstructive pulmonary disease) is a progressive disease that makes it hard to breathe. "Progressive" means the disease gets worse over time. COPD can cause coughing that produces large amounts of mucus (a slimy substance), wheezing, shortness of breath, chest tightness, and other symptoms.

The leading cause of COPD is cigarette smoking. Most people who have COPD smoke or used to smoke.

At first, COPD may cause no symptoms or only mild symptoms. As the disease gets worse, symptoms usually become more severe. Common signs and symptoms of COPD include:
-An ongoing cough or a cough that produces a lot of mucus (often called "smoker's cough")
-Shortness of breath, especially with physical activity
-Wheezing (a whistling or squeaky sound when you breathe)
-Chest tightness

Lung Cancer is cancer that forms in tissues of the lung, usually in the cells lining air passages. The estimated new cases and deaths from lung cancer in the United States in 2012: New cases: 226,160 & Deaths: 160,340

Remind your doctor of your medical and social history at each physical examination to assist in a prompt and accurate diagnosis.
Lung cancer symptoms may include the following:

-Coughing (most common, 50% of cases)
-Blood in sputum (hemoptysis)
-Shortness of breath (dyspnea)
-Wheezing
-Pain in the chest
-Fatigue
-Pneumonia