At the conclusion of a highly successful cross-country tour advocating for single payer, the Mad As Hell Doctors will join with their supporters in Washington D.C.'s Lafayette Park. 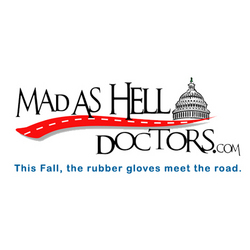 Since then, the White House has received thousands of requests from our supporters asking President Obama to meet with us to discuss single payer. So we're going to have a conference table on stage just in case he's changed his mind. If he wants to join us, he'll be welcome any time.

After three weeks of caravanning across the country on a twenty-six city, single-payer advocacy tour, the Mad As Hell Doctors from Portland, Oregon will hold a final "White Ribbon Rally" in Washington, D.C.'s Lafayette Park from 4-6pm on September 30th.

Dr. Margaret Flowers, one of the "Baucus Eight" arrested in May 2009 for protesting a Senate hearing which excluded single payers advocates from testifying, is helping the Mad As Hell Doctors plan the White Ribbon Rally.
"Single Payer has a lot more friends in Washington than the media likes to portray," says Flowers pointedly. "So I've invited a lot people who would love to the opportunity to demonstrate their support for the movement. People like Rep. John Conyers who cosponsored HR 676, Rep. Eric Massa from New York, Senator Bernie Sanders, Wendell Potter from CMD and others - these are all extremely wise Washington types who understand that single payer in the only honest solution."

Other invited guests include the DC Labor Chorus, songwriter and composer Makuik, the Raging Grannies of Madison and Bob Wickline who will be performing live the original song he composed for the doctors entitled The Mad As Hell Theme Song.

In keeping with the original intention on the tour, the Mad As Hell Doctors will also conduct what they call a Care-A-Van, lead by their logo-wrapped flagship Winnebago affectionately known to their supporters as 'Winnie.' "We really want people to decorate their vehicles with lots of ribbons," says Dr. Joe Eusterman, fellow Mad As Hell Doctor and Winnie's self-appointed captain. "We want people to have fun with it, the way we have. Be safe, but be imaginative. That's how we'll attract attention. And who knows, a few people might even get some of our MAHD t-shirts if they really impress us."

The Care-A-Van will take place on September 30th, the same day as the White Ribbon Rally, starting in Frederick, MD at 9:30 am with a 10:30am stop in Columbia, MD . From Columbia, the long line of ribbon-decorated cars will press on toward Silver Springs Metro Station. In Silver Springs, the Care-A-Van participants will park their cars and take the Metro to McPherson Square in preparation for their March to Lafayette Park at 3:00pm.

"We're calling the DC event a 'White Ribbon Rally' because one purpose is to launch a new national symbol for the Single Payer Movement - the white ribbon," says Dr. Paul Hochfeld, a Mad As Hell Doctor and one of the group's central organizers. "So we're encouraging attendees to make their own white ribbons and find creative ways to wear them, whether as lapel pins or arm bands or whatever. The point is the same as the Care-A-Van - to have fun and bring it with you."

"But the most important reason for the rally is to make good on the promise we announced when the trip began - to put Single Payer back on the table, " Hochfeld remarks ironically, having personally made the choice to place a table on stage during the entire rally.

"Before we left Portland, we requested a meeting with President Obama and he turned us down" Hochfeld continues. "Since then, the White House has received thousands of requests from our supporters asking President Obama to meet with us to discuss single payer. So we're going to have a conference table on stage just in case he's changed his mind. If he wants to join us, he'll be welcome any time."

"We don't imagine he'll show up," says retired radiologist and fellow Mad As Hell Doctor Michael Huntington, "but we still feel strongly that he has an obligation to meet with health care professionals before signing any health care reform legislation. So we'll hold a spot for him at the table and hope for the best. Who knows? He might just surprise us. He's done it before."