Gaadi.com, India’s leading online portal for posting the particulars about used cars and new cars, gaadi.com delivers an insight into the Mahindra Scorpio. Users will be capable to catch the new upgraded version of Mahindra Scorpio to the Indian market very soon. 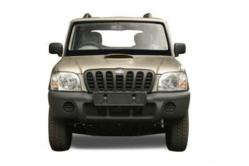 Research done by Gaadi.com says that Mahindra is planning to launch an upgraded version of Mahindra Scorpio. Mahindra has already started its upgradation work on Mahindra Scorpio some time back. This upgradation project has been named W105. According to the source, the upgraded version is likely to arrive in the year 2014 to the India market. The operation on the project W105 is at full swing which is going- on in the Mahindra Research Valley situated at Chennai.

Research says that the major alteration will be seen in upgraded Scorpio is reduction in its weight by 260 kilogram with the integration of fibre parts by a special project called T026, which will ultimately increase the efficiency level of the car. Mahindra is also eyeing to increase the wheelbase along with the addition of 2.2 L engine from Cheetah XUV 500 which will give 140bhp @ 330Nm of torque.

Looking by the existing vehicle range of Mahindra, it can be concluded that it has always made strong and rough SUV that can shot out the best on the patchy roads of India and can be assumed that its upgraded version will come out with a bang.

Gaadi.com unveiled a detailed page of Mahindra Scorpio that provides complete specifications, features, expert and user reviews along with some amazing pictures of the variants of Quanto. It also contains the exhaustive review of the first drive for select few Indian journalists.

About The Company
Gaadi.com is the leading online automotive marketplace bringing together car buyers and car sellers. New car buyers can research their car purchase while used car buyers can browse through the largest collection of inventory online. It is the best resource for new car research in India, providing users with information, opinions & tools to ease the process of finding a suitable car. Gaadi.com’s used car marketplace is the best in online space with a comprehensively curated and photographed stock of used cars. It provides a transparent and reliable platform for used car listings with detailed information for used car buyers.

Visit http://www.gaadi.com/Mahindra-Scorpio to know more about Mahindra Scorpio at Gaadi.com