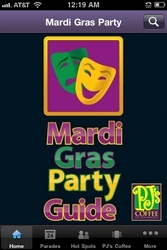 Strategic use of social and mobile media with something as fun as Mardi Gras is a great way to organically reach our consumers, says Reid Nolte Marketing Director for PJ's Coffee.

Stay informed, connected and enjoy special offers from PJ’s Coffee this Mardi Gras season with live updates, photos, tweets and interactive parade schedules and maps with The Mardi Gras Party & Parade Guide, the highest rated New Orleans Mardi Gras App of the 2010 Mardi Gras Season (5 out of 5 stars average in the APP Store by reviewers in 2010) and the only app available on all 3 Mobile Platforms.

Mardi Gras Party & Parade Guide sponsored by PJ’s Coffee, is back for the second year and is available for FREE for a limited time on all 3 Mobile Platforms: iTunes, Android and Blackberry and can be found by searching Mardi Gras Party on your phone or by following these links to each of the App Stores:

The incredibly fun Mardi Gras App also helps users locate the nearest PJ's Coffee of New Orleans to each parade route! With 39 stores in greater New Orleans and more than 65 nationally, it will be easy to meet friends for a cup of King Cake Blend before or after the parade whether in New Orleans or not.

“PJ's is as much about New Orleans as Mardi Gras, and we think that utilizing this app is a great way to share the experience with others,” states Reid Nolte, Director of Marketing for PJ’s Coffee of New Orleans. “Strategic use of social and mobile media with something as fun as Mardi Gras is a great way to organically reach our consumers,” adds Nolte. “When people are thinking about Mardi Gras, and where to stand on the route and look at the app, we hope they will think of grabbing some PJ's King Cake Blend for the road!"

“After a tremendously successful Mardi Gras season in 2010, we couldn’t resist coming back with a more robust and enhanced version that offers what we feel is the most comprehensive, socially connected, multi-platform Mardi Gras app on the market. While other Mardi Gras apps provide static information about parades, The Mardi Gras Party and Parade Guide provides information and tools that enhance the overall Mardi Gras experience,” says Aric Webb, co-developer of the App. “We couldn’t have selected a more perfect marketing partner than PJ’s Coffee. They are the quintessential New Orleans brand that brings people together on a daily basis. It was easy to creatively and organically integrate them into the app,” adds Webb.

PJ’s Coffee of New Orleans uses hand-selected, premium Arabica beans which are slow-roasted in small batches at its New Orleans roasting facility. PJ’s Coffee was established in 1978 and began franchising in 1995. Today there are 63 PJ’s locations in seven states. For more information, visit http://www.pjscoffee.com or http://www.neworleansroast.com.

New Orleans Hot SpotsThe Hot Spots Section is a unique list of our favorite spots from all over New Orleans chosen by locals.

Lists of New Orleans Favorite SpotsFind the nearest PJ's Coffee near you or the parade route along with other favorite New Orleans Hot Spots.