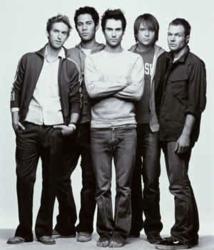 Maroon 5 Taking their Overexposed Album to New Heights on the 2013 U.S. Tour. Since the February 13 opening of their 2013 Overexposed tour in Columbus, Ohio, Maroon 5 has been putting up a concert almost every other night. The March 7 and 9 shows will be in Canada, then the band returns to the U.S. to entertain fans at the Key Arena in Seattle, Washington on March 11. Next its California’s turn; the band will perform to their hometown crowd in San Jose and Los Angeles on March 13 and 15 respectively.

Fans in Las Vegas, Nevada can gear up to see them live on March 16 at Mandalay Bay. This hectic tour schedule of 31 cities in under eight weeks continues at various cities across the U.S. until April 6, when all roads in Rosemont, Illinois will lead to the Allstate Arena for the farewell performance of the Maroon 5 Overexposed tour 2013.

Maroon 5 consists of Adam Levine, Mickey Madden, Jesse Carmichael and Matt Flynn. They first shot to fame with their debut album Songs About Jane in 2002, and went on to win the Grammy Award for Best New Artist in 2005. Their second album It Won’t Be Soon Before Long topped the Billboard 200 chart in 2007, and their third album Hands All Over took up No. 2 position in 2010. The band has released its fourth album Overexposed in June 2012, which was a smash hit almost instantly. Their mission on the current 2013 U.S. tour is to further spread the popularity of the songs from this album.

Joining Maroon 5 on stage during the Overexposed tour are two other popular bands. Neon Trees has made it to the top of the alternative rock charts; their single Everybody Talks was one of the hit videos of 2012. Owl City’s electronica music has been gathering quite a fan-following itself, with hit singles like Fireflies and Vanilla Twilight. You don’t want to miss such an entertaining line-up soon coming to your city; grab your tickets now.

Doremitickets.com #1 Source for Maroon 5 Tour 2013 Dates Concert Tickets Secure Website, Money Back Guarantee. Doremitickets.com is a retail website founded in 2009. Since launching in 2009, our website has helped connect thousands of live entertainment fans to the vast network of ticket brokers that list tickets on the doremitickets® Online Exchange. These professional ticket brokers offer more than 7.5 Million event tickets on our exchange every day.