Matt Bacak is back. After nearly four years in retirement, he's returning to the speaking world thanks to the chance of a lifetime of working with celebrity Speaker Agent/event planner Gail Kingsbury. 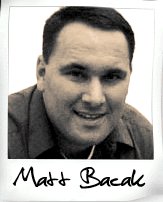 Bacak is dusting off his public-speaking hat and is joining the circuit again under the wings of professional Speaker Agent/event planner to the stars, Gail Kingsbury.

Internet Marketing Legend, Matt Bacak announced that he would be retiring from public speaking. That proclamation came as a major disappointment to the hundreds of consultation clients he'd helped leverage the Internet into a major money-making instrument and to thousands of others waiting in line to learn the secrets to his success. Now those dejected Internet marketers can start smiling again. Bacak is dusting off his public-speaking hat and is joining the circuit again under the wings of professional Speaker Agent/event planner to the stars, Gail Kingsbury.

Coming out of retirement is more en vogue than ever before. Recent news headlines have featured Ricky Gervais as David Brent in the UK version of the popular sitcom "The Office", Uggie the dog from the Oscar-winning film "The Artist" and Jay & Silent Bob all doing it. But none of these much loved and much missed performers would be dusting off their performing chops without good cause. Raising money for charity as part of Comic Relief, serving as spokes dog for the Humane Society of the United States' Pets of Valor Award and starring in a new animated film, respectively, have tempted these performers out of their golden years.

Now the Internet Marketing World can add another well-known but not heard from in a long time name to that list. Almost four years after shocking the speaking community by announcing he would be hanging up his speaking hat in order to spend more time with his family, Matt Bacak is back. He will soon be on the public speaking circuit once more and with a good reason motivating him.

This time around, Bacak will be joined by Gail Kingsbury of the Kingsbury Group and founder of Gail's Calendar (http://gailscalendar.com/). A personal and professional event resource, Gail has worked with a virtual who's who of top-notch speakers like Tony Robbins, Wayne Dyer, Barbara DeAngelis and Deepak Chopra, and Bacak considers her his secret weapon in securing only the crème de la crème of speaking engagements.

Bacak has known Kingsbury for years and had always wanted to work with her. So when the opportunity to do so presented itself, there was no way he could turn it down. Even his long-ago decision to retire from the speaking circuit couldn't keep him from saying yes to this professional partnership.

Bacak's not kidding when he says Kingsbury represents only the best. In addition to all the big-name speakers previously mentioned, she's also worked with past U.S. Presidents like Ronald Reagan, Olympic athletes and business moguls.

Bacak's return is good news for the Internet Marketing World. Before pulling himself off the public speaking market, he devoted his time to coaching and consulting with others so they could benefit from the experience that made him an online millionaire before the age of 30. At long last, would-be Internet millionaires can finally gain access to his wealth of money-making knowledge once again.

To learn more about the professional event planner who has wooed Bacak out of speaking retirement or to book Matt Bacak for a speaking engagement contact Gail Kingsbury at http://gailkingsbury.com/contact/