Matt Bacak's $1 Internet marketing seminar giveaway as now over, but success is such sweet revenge. Taking a cue from Robin Hood, the "Powerful Promoter" takes millions of potential dollars away from the former student who ripped him off and puts $30,000 into the hands of Habitat for Humanity. 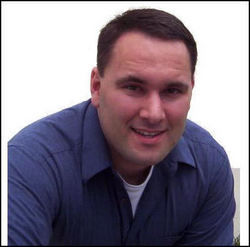 Because we had such an overwhelming response to this offer, I had to rescind it sooner than expected. We went through over 12,000 gigs of bandwidth on the weekend seminar videos in less than two weeks.

When one of Matt Bacak's former students recently ripped him off by stealing his top-secret seminar material, the Internet marketing millionaire-maker could have gotten mad ... very mad. Instead, he decided to get even. By keeping his temper in check, Bacak was able to turn a bad situation into a do-good opportunity. When Bacak decided to match wits with his foe and give away his stolen $5,500 seminar secrets for $1, the New Orleans Area Habitat for Humanity (NOAHH) came out the winner.

Over the course of just two weeks, 14,897 Internet marketers took advantage of Bacak's generous offer. Philanthropist that he is, Bacak then turned around and matched their contributions, ultimately handing over a check for $30,000 to NOAHH. Charity-minded entrepreneurs who would like to see how Bacak donned his Robin Hood tights and outfoxed his scam-artist competition with generosity can do so online at http://MattBacakRetires.com.

In August of 2005, Hurricane Katrina ripped through the New Orleans area, leaving abodes -- and lives -- devastated in its wake. Thousands of the city's residents were left stranded, with no place to call home. That's when the New Orleans Area Habitat for Humanity stepped in. An affiliate of Habitat for Humanity International, NOAHH is a volunteer effort that aids in the ongoing recovery and rebuilding of New Orleans. Now, thanks to the charitable endeavors of the back-stabbed "Powerful Promoter," NOAHH is $30,000 closer to reaching its recuperative goals.

In mid-April, when Matt Bacak first announced that he was going to beat his rip-off-artist competitor with a $1 giveaway that would virtually put the scammer out of business, he had no idea how popular the offer would become. By April 29, 2008, overwhelming response forced him to withdraw the offer, but not before he had managed to give away his seminar secrets to 14,897 up-and-coming online entrepreneurs. Every single dollar he raised was earmarked for Habitat for Humanity, with Bacak himself then matching outside contributions dollar for dollar.

Bacak explains, "Because we had such an overwhelming response to this offer, I had to rescind it sooner than expected. We went through over 12,000 gigs of bandwidth on the weekend seminar videos in less than two weeks." The response may have caught Bacak off guard, but it didn't surprise the thousands of rising Internet marketers who took advantage of the deal while they could.

Each and every one of them recognized in the opportunity what former Bacak student Choix Melchoir puts so succinctly: "Every opportunity you get to learn from Matt Bacak, you should grab it with both hands, because you are going to benefit way more than you can imagine. If you truly want to take your business and life to the next level with Internet marketing, Matt Bacak is the man for the job."

For more information on Bacak's charitable donation to the New Orleans Area Habitat for Humanity, contact Stephanie Bunn at (770) 271-1536. To see how Bacak managed to raise $30,000 for NOAHH in just two weeks, visit http://www.MattBacakRetires.com.