For the third consecutive time, author Matt Bacak has handed over the creative reins to his upcoming book, “Click Your Way to Millions: The Six-Step Formula to My First Million Dollars Online.” Following the course of action he employed with both the title and the content, he recently conducted a poll whereby his fans and followers chose the cover design that will grace the tome. 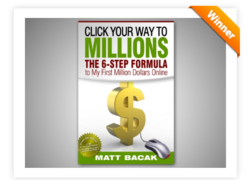 From title to content to cover design, this book has been picked by fan opinion all around.

When Internet marketer Matt Bacak couldn’t decide last week among the eight concepts his cover designers had come up with for this new book, “Click Your Way to Millions: The Six-Step Formula to My First Million Dollars Online,” he didn’t fret. Instead he employed the same strategy he’s been using all along in making creative decisions for the book and asked his fans to make the final call. From potential readers’ votes, the winner has now been chosen.

Rather than drive himself nuts over making the right call regarding the cover design for his book, Bacak put out an email to his longtime fans last week. In his usual deferring-to-the-masses style, it stated, “I need some help real quick. I can't figure out which book cover I like best for my upcoming book. The design contest is about to end soon and so I need to decide real quick. I'd love your opinion. Please take a sec to vote.”

Matt Bacak followed up that message with an update to his social media followers: “Help! I can’t figure out what book cover to pick and the contest is ending .... I'd love your opinion.” Both SOSs included a link to a poll page featuring eight different cover concepts. Recipients of these distress signals responded in droves. “The response was nothing short of amazing,” Bacak reveals.

So what does the winning design look like? Spiraling out of the center of a crisp, clean white background is a large golden dollar sign with a silver computer mouse trailing from it. With its emphasis on big money and Internet marketing technology, the concept seamlessly combines all the key elements of the title, “Click Your Way to Millions: The Six-Step Formula to My First Million Dollars Online.

Interestingly enough, however, the vote-getting entry for the updated and enhanced edition of “Click Your Way to Millions,” which will hit bookstore shelves in March 2012, is not the one Bacak thought it would be. Several hours into the polling, Bacak said, “Funny thing is, the one I thought would win is not.”

He went on to add, “It reminds me of the title survey,” wherein his friends and fans picked “Click Your Way to Millions: The Six-Step Formula to My First Million Dollars Online” over the competition. “The one I guessed that time around lost too.”

Despite his preconceived frontrunners losing out, Matt Bacak is all about giving the people—in this case the individuals who will buy and read the book—what they want. “From title to content to cover design, this book has been picked by fan opinion all around.”

To learn more about what reader-chosen concepts and content “Click Your Way to Millions: The Six-Step Formula to My First Million Dollars Online” will contain, contact Dave Wilson at 1-404-537-1321. To see the book’s vote-winning cover design, visit http://www.mattbacak.com/in-the-news/click-your-way-to-millions-book-cover/ .