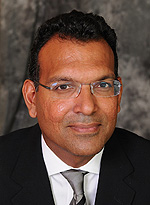 After NYU, he completed a medical internship at the University of Chicago and was a neurology resident and then chief resident in neurology at Johns Hopkins University from 1991-1992. There he was awarded the Jay Slotkin Award for excellence in research while a resident; and the Passano Foundation Clinician Scientist Award while completing his fellowship in neurorehabilitation as a post-doc in the Hopkin’s Department of Neuroscience. In 1994, he was promoted to assistant professor of neurology and rehab medicine at Hopkins and started his own lab.

In 1996, he was recruited to set up the Neuroprotection Laboratory in the Department of Neurology and Neuroscience at Harvard Medical School (Harvard Institutes of Medicine and Beth Israel Hospital). He became an associate professor at Harvard Medical School in 1999. In 2002, Dr. Ratan came to Burke to direct the Burke Medical Research Institute. During his tenure, he has recruited and retained many top notch scientists that now make up the BMRI staff.

MCPR, LLC was founded in 1994 and specializes in medical marketing and public relations for doctors, hospitals and other professionals in health, fitness and beauty. http://www.mcprpublicrelations.com