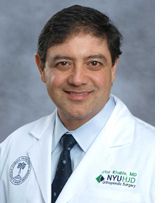 Bio:
Dr. Victor Khabie, Board Certified Orthopaedic Surgeon, is Chief of Surgery and Chief of Sports Medicine at Northern Westchester Hospital where he also serves as the Co-Director of the Orthopaedic and Spine Institute. He is in practice at Somers Orthopaedic Surgery & Sports medicine Group in Carmel, NY.

Dr. Khabie is a leading expert in the field of Orthopaedic Sports Medicine Surgery and possesses a particular interest in shoulder and knee arthroscopic surgery. He is the creator of a unique, patented knee brace with a multidimensional neoprene support called the “Victory Knee Brace” which was first introduced at the American Academy of Orthopaedic Surgeons Annual Meeting in San Francisco in 2004.

After carrying out his residency in Orthopaedic Surgery at the Hospital for Joint Diseases Orthopaedic Institute in New York City, he went on to complete his Fellowship in Sports Medicine Surgery at the Kerlan-Jobe Orthopaedic Clinic in Los Angeles, a world-renowned center in the diagnosis and treatment of Orthopaedic and Sports Medicine injuries. During his fellowship, Dr. Khabie participated in the care of the Los Angeles Lakers, Los Angeles Dodgers, Los Angeles Kings Hockey Team, Anaheim Mighty Ducks Hockey Team, LA Sparks Professional Woman’s Basketball Team and the University of Southern California (USC) Football and Basketball Teams.

When Dr. Khabie is not performing arthroscopic surgery, he is a Ring Side Physician for the New York State Athletic Commission where he cares for professional boxers and has been present at ringside for numerous world championship bouts. He also serves as Team Physician for the Pace University Athletic Department, Newburgh Free Academy Athletics, as well as for many high school, collegiate and professional athletes.

Dr. Khabie is a published author in the medical literature and has made numerous presentations to both local and national groups. He was the Sports Medicine Column writer for a local New York newspaper, The Patent Trader. He has appeared on NBC News, The Today Show and local cable television programs. He has been widely quoted in the media by organizations such as ESPN, Sports Illustrated, The Associated Press, Reuters and numerous newspapers and magazines related to his work as a Sports Medicine Surgeon. Dr. Khabie was featured in the New York Times Article, "When the Bell Sounds, Surgeon Answers Ringside Calling" July 2011. He was also a featured guest on Sirius XM Radio, Starz Channel "Broadminded" morning talk show. Dr. Khabie was featured on the CBS Early Morning Show "Surgeon by Day, Ringside Doctor by Night" Aug. 2011. Dr. Khabie is also a regular guest host on "Talk Back Live" WOR Radio, New York 710 AM.

MCPR, LLC was founded in 1994 and specializes in medical marketing and public relations for doctors, hospitals and other professionals in health, fitness and beauty. http://www.mcprpublicrelations.com.