Saint Petersburg Global Trade House, had announced this week that it had merged with another highly respected and visible name in Brooklyn’s retail environment, Kids’ World. This move created a new kind of a Russian goods store, bringing Russian products for all age groups together under one roof, establishing the first true mega-store of Russian goods in North America. 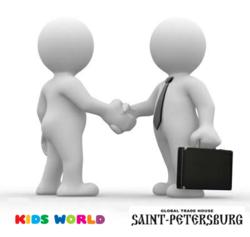 Saint Petersburg is really embracing the concept of one-stop-shopping, making it easier for our customers to find virtually anything they are looking for, all available under one roof.

The largest seller of Russian gifts, movies, books, and music outside Russia, Saint Petersburg Global Trade House, announced its merger with Kids’ World this week, one of the most respected children’s stores in Brooklyn, NY, specializing in children’s merchandise from Russia, other European countries, and the United States. Over the previous weeks, the complete selection of Kids’ World merchandise had been added to the already massive list of products, available at Saint Petersburg.

The move is aimed at making shopping for any type of Russian product easier and more convenient. This is especially important in a city like New York, where parking space is difficult to come by. “Saint Petersburg is really embracing the concept of one-stop-shopping, making it easier for our customers to find virtually anything they are looking for, all available under one roof,” said the president of Saint Petersburg, Natalia Orlova. Interestingly, New York, called the “Capital of the World” by many, had been the slowest to adapt this concept and, to this day, still boasts a great number of small, independent specialized retailers, spread out across the whole breadth of the New York Metro area, possibly due to the fact that space is very limited throughout the city. “In the past, our customers, looking to purchase literature or other products for grown-ups, as well as children, had to visit both Saint Petersburg and Kids’ World, making their shopping trips longer. But now, no matter what item or items they are looking for, be it an amazing and rare Gzhel porcelain tableware piece, a colorful and exciting children’s book, or a talking plush toy, such as the famous Cheburashka, our customers are now bound to find it all under one roof – inside our flagship store on Brooklyn’s Brighton Beach Avenue,” Ms. Orlova added.

The history of the iconic Saint Petersburg store on Brighton Beach Avenue is long and closely entwined with the history of the Russian-speaking immigrants from the former USSR (mostly coming from Ukraine). In the late 1980s, a large portion of these immigrants moved into the area around Brighton Beach Avenue because it reminded them of their native Odessa. As this fast-growing community swelled in size, it created a high demand for a local cultural center where people could not only buy great Russian books, music, or movies, but where they could also meet with famous writers, sports figures, musicians, actors, as well as with each other. And so, the famous Saint Petersburg store was born.

Having become the cultural landmark of the Brooklyn’s Russian-speaking community, Saint Petersburg may be found mentioned in many contemporary books, as well as shows about the culture and food of the Borough of Brooklyn, NY. And, of course, no part of Saint Petersburg is as well-known to everyone, as its logo, depicting the famous statue of Peter the Great, sitting on his horse, rearing it up on its hind legs. This statue, called “The Bronze Horseman,” was built on the Senate Square in the center of Saint Petersburg by Étienne Maurice Falconet, under the commission from Catherine the Great, and is said to be situated on the largest stone ever moved by man. Half a century later, Aleksandr Pushkin’s poem, “The Bronze Horseman,” written about the statue, immortalized it in arguably some of the best poetry ever written, making the statue even more famous throughout Russia and abroad. Thanks to this poem and the City of St. Petersburg’s fast-growing wealth and prominence, the statue came to be loved by both the residents of the city and its myriad guests, becoming the true symbol of this magnificent metropolis and the grand monument to its stern ambitiousness. “Naturally, we chose this statue as being one of the most symbolic images in Russia,” says Ms. Orlova, recalling the grand beginnings of her company.

Through the years, as demographics, economy, and the world as a whole changed, this symbolism had continued to permeate the life and soul of Saint Petersburg as a company. Nowadays, the store still stands triumphantly on Brighton Beach, just as its emblem, reared up on hind legs to face its future, becoming the only remaining famous landmark from the Brighton Beach of the booming 80s and 90s. Now, whatever this future has in store for the company, one thing is clear – Saint Petersburg Global Trade House will always stay true to its original purpose and philosophy, continuing to be much more than just a store to its customers, being, in fact, a link to their past – a link to the times long gone, the times when they took their first steps on this world, the times when they made their first friends, and the times when they first fell in love. And this truly is the purpose, worth existing for.

Founded in 1994, Saint Petersburg Global Trade House takes its roots in Brooklyn, NY – the heart of NYC’s Russian speaking community. Saint Petersburg GTH takes great pride in the fact that it is the largest seller of Russian gifts, books, music, and movies outside Russia. The company offers products through its free colorful printed catalog, as well as operating brick-and-mortar stores in Brooklyn. The catalog is published quarterly in editions of 50,000 copies and can be requested by calling the toll-free number at 1-800-531-1037.

The newly remodeled store may be seen in great detail on the company's virtual tour.

For additional information about the companies that have merged, visit http://www.fromrussia.com/ & http://www.internationaltoys.com/