System to be used to conduct multi-year migratory bird study along the Texas Gulf Coast as part of multi-radar avian survey network. 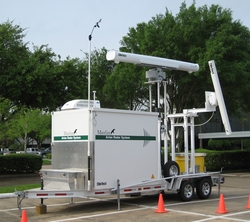 
Panama City, FL The Texas A&M University Caesar Kleberg Wildlife Research Institute (CKWRI) has ordered a second MERLIN Avian Radar System to support a multi-year migratory bird research study for the Texas Gulf Coast. The CKWRI ordered its first MERLIN system in 2007 that has been used to collect data on bird activity in the lower Gulf coastal areas for the spring and fall 2007 migratory seasons. In addition to supplying the MERLIN system, DeTect is providing on-going study design and data processing and analysis support to the University researchers.

The CKWRI is the leading wildlife research organization in Texas and one of the finest in the United States. Its mission is to provide science-based information for enhancing the conservation and management of wildlife in coastal South Texas. The Institute was established at the University in 1981 by a grant from the Caesar Kleberg Foundation for Wildlife Conservation.

The MERLIN Avian Radar System is a self-contained, fully mobile, automated, advanced ornithological radar system that includes specialized bird and bat radar detection and tracking software, an on-board operator/equipment cabin, the MERLIN GPS/Compass® geo-referencing system, on-board power, and a data/communications uplink for unattended 24-7 operation. MERLIN represents the state-of-the-art in avian radars for aviation safety, environmental management and migratory research. The technology, originally developed for the US Air Force and NASA, is being increasingly used to support avian research, wind energy, mining and landfill projects worldwide for risk assessment and mitigation. Over 40 MERLIN systems have been delivered to date to project sites in the U.S., Canada, Europe and Africa.