San Jose’s Royal Taco now has new items on their menu. Diners can dine-in or order these new dishes for takeout. 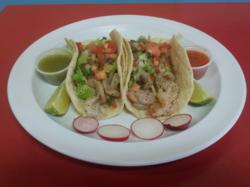 Royal Taco of Milpitas is proud to announce shrimp tacos as a new entree on their menu this month.

Royal Taco is proud to announce that they feature four new entrees on the menu this month. Royal Taco has been serving up delicious, authentic Mexican food for the residents of San Jose for over 30 years. Their new menu items add more options to their already extensive list of classic Mexican favorites.

Royal Taco's list of Mexican food is affordably priced. Royal Taco also offers Mexican takeout services for those who do not want to dine at the restaurant.

Royal Taco can cater, too, bringing their Mexican flavor to corporate events, private functions, retreats, receptions, and more. Featuring the same delicious items on their menu, they can arrange all the items for take-out or for delivery.

For more information about Royal Taco's new menu items or questions about catering, please visit http://www.royaltaco.com or http://www.milpitasmexicanfood.com or call (408) 457-0860.

Royal Taco of Milpitas also has a new tortilla soup entree on their menu.Mexican take out