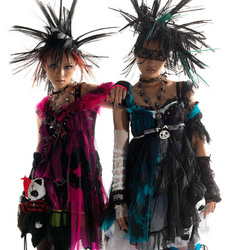 Japanese fashion today embraces not only the cerebral, avant-garde looks associated with the first wave of Japanese design in the 1980s but also a range of youth-oriented looks, such as Gothic Punk Lolita and Forest Girl styles.

The Museum at the Fashion Institute of Technology (MFIT) presents Japan Fashion Now, the first exhibition to explore contemporary Japanese fashion in all its radical creativity, from designer fashion to street style, including menswear.

“Japan continues to be on the cutting-edge – maybe even the bleeding edge – of fashion,” says museum director and exhibition curator, Dr. Valerie Steele. “However, Japanese fashion today embraces not only the cerebral, avant-garde looks associated with the first wave of Japanese design in the 1980s but also a range of youth-oriented looks, such as Gothic Punk Lolita and Forest Girl styles. Some of the most interesting designers – including menswear designers – combine avant-garde and sub-cultural styles. Equally significant is the Japanese obsession (not too strong a word) with perfecting classic utilitarian garments, such as jeans and work wear.”

The introductory gallery of Japan Fashion Now, devoted to the Japanese “fashion revolution” of the 1980s, will set the scene for today's looks by featuring approximately two dozen iconic examples of asymmetrical, “deconstructed” garments by Yohji Yamamoto and Rei Kawakubo of Comme des Garçons, as well as avant-garde styles by Issey Miyake, who combined innovative textile technologies with aspects of traditional Japanese dress. Both men’s and women’s styles by Matsuda will also be featured, as will “Orientalist” fashions by Kenzo and Hanae Mori, and pop-culture jumpsuits by Kansai Yamamoto.

The main gallery will reveal approximately 90 ensembles set within a dramatic mise-en-scène evoking the iconic cityscape of 21st-century Tokyo and organized on four platforms. The first platform will illustrate how the work of pioneering avant-garde fashion designers has changed over the past 25 years. Ensembles by Yohji Yamamoto, Rei Kawakubo, Junya Watanabe, and Tao Kurihara, for example, will exemplify the evolution of deconstruction and reconstruction, as well as the influence of sub-cultural styles such as punk and the Japanese cult of cuteness. Next will come a range of looks by Jun Takahashi of Undercover, described by journalist Suzy Menkes as “the essence of Japanese cool.” New designers featured include Hiroyuki Horihata and Makiko Sekiguchi of Matohu (who are inspired by Japanese aesthetics), the flamboyant Toshikazu Iwaya of Iwaya33, and Chitose Abe of sacai.

Because menswear is one of the most exciting categories within contemporary fashion, an entire platform will be devoted to some of Tokyo’s up-and-coming menswear designers. Former boxer Arashi Yanagawa of John Lawrence Sullivan, Daisuke Obana of N.Hoolywood, Koji Udo of Factotum, Yasuhiro Mihara of Miharayasuhiro , Takeshi Osumi of Phenomenon (who just presented his first spectacular runway collection in Tokyo), and Yosuke Aizawa of White Mountaineering will be among those featured, as will be the pioneering label, Number (N)ine.

Street and sub-cultural styles – from the elegant and bizarre costumes called Kamikaze suits worn by members of Japan’s notorious Speed Tribes to this year’s Forest Girl look – will occupy the third platform. The significance of kawaii (cute) culture in Japan, which will be debated at the museum’s annual Fashion Symposium held on November 4-5, 2010, will be demonstrated by the hyper-cute Princess Decoration style and famous Lolita brands such as Angelic Pretty and Baby, the Stars Shine Bright (the latter featured in the cult movie Kamikaze Girls), as well as Gothic Lolita fashions by brands such as Alice Auaa and Black Peace Now. Hirooka Naoto, the designer behind h.NAOTO, Japan’s most successful Gothic-Punk-Lolita fashion empire (who has said, “I aim to be the most extreme and scandalous brand in the world”) will be prominently featured. A highlight of the exhibition will be the clothes he designed for idol singers Hangry and Angry.

Extreme, even fanatical, attention to detail is characteristic of much of the best Japanese fashion. While some designers are drawn to novelty, others focus on the perfection of vernacular garments, including work wear and denim. “Utility products,” including denim and footwear by Hiroki Nakamura of visvim, along with jeans and vintage-style military and leather jackets by brands such as Buzz Rickson (creator of the William Gibson collection), Freewheelers, and Mastermind, will be featured in the street style section.

Finally, the clothing category known as Cosplay (short for “Costume Play”) will be featured on the fourth platform. Not really fashion, Cosplay is more a type of performance art, associated with anime and manga. Examples will include outfits for the characters Madame Red and Oscar (the latter from the famous manga Rose of Versailles), as well as one of today’s popular catmaid uniforms.

Japan Fashion Now is being designed by Charles B. Froom, with graphic design by Jen Pressley of MIRRORNYC. Additional assistance will be provided by Assistant Professor of Communication Design C.J. Yeh and the FIT Media Design Club.

Japan Fashion Now has been generously sponsored by Yagi Tsusho Limited, a global marketing and merchandising company specializing in fashion that has been introducing excellent brands from Europe and the U.S. to the Japanese market for more than 60 years, MONCLER and MACKINTOSH among the most recent.

Events
The exhibition will be accompanied by a wide range of public programs, including gallery tours and a Lolita tea party, all of which will be part of the museum’s Fashion Culture series. The Museum at FIT will hold its annual Fashion Symposium on November 4-5, 2010, on the subject of Japanese fashion. Internationally recognized scholars will speak on such topics as the significance of cuteness in Japanese culture, the schoolgirl uniform, and the spread of Gothic and Lolita fashions throughout East Asia. For a program of events, call 212 217.4585 or email museuminfo@fitnyc.edu.

A Fashion Museum
The Museum at FIT is the only museum in New York City dedicated to the art of fashion. Best known for its innovative and award-winning exhibitions, which have been described by Roberta Smith in The New York Times as “ravishing,” the museum has a collection of more than 50,000 garments and accessories dating from the 18th century to the present. Like other fashion museums, such as the Musée de la Mode, the Mode Museum, and the Museo de la Moda, The Museum at FIT collects, conserves, documents, exhibits, and interprets fashion. The museum’s mission is to advance knowledge of fashion through exhibitions, publications, and public programs. Visit http://www.fitnyc.edu/museum.

The museum is part of the Fashion Institute of Technology (FIT), a college of art and design, business and technology that educates more than 10,000 students annually. FIT is a college of the State University of New York (SUNY) and offers more than 46 majors leading to the AAS, BFA, BS, MA, MFA, and MPS degrees. Visit http://www.fitnyc.edu.

The Couture Council is a membership group of fashion enthusiasts that helps support the exhibitions and programs of The Museum at FIT. The Couture Council Award for Artistry of Fashion is given to a selected designer at a benefit luncheon held every September. For information on the Couture Council, call 212 217.4532 or email Couturecouncil(at)fitnyc(dot)edu.

Admission is free and open to the public.