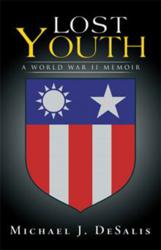 The India-Burma Theater of the Second World War is an often-overlooked aspect of what was the bloodiest conflict in human history, yet it was nonetheless a vital portion of the Pacific Front, where decisive battles to determine the fate of Asia played out between the Allied Forces and Imperial Japan. In Lost Youth: A World War II Memoir, U.S. Army veteran Michael J. DeSalis shares his experiences in what has come to be known as the ‘Forgotten Theater of World War 2.’

The account begins on November, 1942, when DeSalis volunteered for the U.S. Army Air Force, a fateful decision that, in the coming months, would lead him to undergo basic training, where he would prove himself to be an adept marksman. Afterwards, DeSalis and thousands of other recruits would then be shipped halfway across the world, past stormy seas and stops at Australia, before finally arriving at Bombay, India, where the true ordeal would begin. There, they endured many adversities ranging from enemy bombings to the treacheries of nature and, ultimately, time itself – the months that became years, that turned teens into war-weary veterans.

The author shares his many experiences during this period, including the drudgery of logistics work, pleasant distractions during their leaves, and tragic accidents wherein lives are lost. DeSalis portrays what it is like to be a young man in a strange and distant land during a perilous time, while refraining from stereotypical scenes of combat and violence. “I can think of and recall many more events and incidents that are either too raunchy or disgusting or merely uninteresting. If you want to hear gory tales, read ‘D-Day’ or ‘Kelly’s Heroes,’” he states.

“Some of these revelations are not accurate enough to be considered factual, and my eighty-eight-year-old memory might have taken some liberties. This experience, factual or not, made me realize at a very young age that life is not wasted on the youth. I might have lost my youth, but I gained an appreciation for living,” DeSalis adds, revealing the crux of his narrative, and the volition of his recollection.

Lost Youth: A World War II Memoir is not only an account of DeSalis’ experiences in the unsung battlefields of India-Burma, it also remembers and honors the countless others who served in that front, as well as the entirety of the Greatest Generation, and those who sacrificed so much for the preservation of freedom across the world. DeSalis’ work is a rare glimpse into the truth that lies behind war stories - the real life of a real veteran.