Mixed Roots Foundation to Announce New Honorary Board at Anniversary Celebration Benefit Event on May 18 in Sausalito, CA

Mixed Roots Foundation will be celebrating its second year of being established and will announce and recognize its new Honorary Board that includes Michael Reagan, Dr. Emmett Carson, and Amy Anderson as well as other special guests at an anniversary celebration benefit event that will take place on Saturday, May 18, 2013 in Sausalito, CA 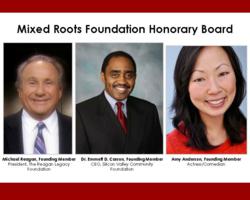 “I was adopted and grew up in Chicago and believe that Mixed Roots will become one of the leading foundations that will make a difference. I look forward to helping raise more public awareness about the myriad of issues adoptees can face

The Mixed Roots Foundation has established a new Honorary Board that will consist of high profile, well known influential leaders in the community to help promote and support the work of the foundation. These individuals along with other specials guests will be announced and recognized at an upcoming anniversary celebration benefit event that will take place at a private mansion in Sausalito, CA on Saturday, May 18, 2013. Mixed Roots will be celebrating its second year of being established on May 25, 2013.

“I am honored to be a Founding Honorary Member for the Mixed Roots Foundation”, stated Michael Reagan, adopted son of actress Jane Wyman and former U.S. President Ronald Reagan. “Over the past year and a half, I have been inspired by the work that Mixed Roots has been able to accomplish in such a short amount of time. I look forward to being a part of a growing organization that will have a deep impact on all who have been touched by adoption both locally and globally”.

“It is with great hope and high expectations that I lend my support to the Mixed Roots Foundation”, expressed Dr. Emmett D. Carson, Founding Honorary Member, Mixed Roots Foundation. “I was adopted and grew up in Chicago and believe that Mixed Roots will become one of the leading foundations that will make a difference in the lives of adoptees and their families. I look forward to working with Mixed Roots in helping to raise more public awareness about the myriad of issues adoptees can face”.

“Being adopted from Korea and growing up in Minnesota, I am very excited to be involved with an organization that celebrates and embraces all aspects of adoption”, said Amy Anderson, Founding Honorary Member, Mixed Roots Foundation. “I also have my own biological daughter who is half white and half Korean, so I really appreciate all the work that Mixed Roots is doing to welcome mixed race families like mine. I am proud to support Mixed Roots and I encourage others to get involved and do the same”.

In addition to announcing the new Honorary Board members, Mixed Roots will feature various signature items prepared by local celebrity chefs as well as provide an opportunity for guests to learn more about Mixed Roots two program goals for 2013which include establishing a national adoption mentoring initiative that will provide positive adult adoptee role models to adopted and foster youth and officially launching the Global Adoptee Genealogy Project (GAGP) that will assist adoptees to discover their biological and cultural roots through DNA testing.

Anniversary celebration benefit event invitations will be sent out during mid March. To learn more about Mixed Roots Foundation’s new Honorary Board members, its programs, or details on the anniversary celebration benefit event, please LIKE Mixed Roots Foundation on Facebook, call 800.659.6958, email info@mixedrootsfoundation.org, or visit http://www.mixedrootsfoundation.org for more information.

About Mixed Roots Foundation
Mixed Roots Foundation is a 501(c)(3) nonprofit organization which aims to leverage philanthropy to provide more post adoption resources. The foundation promotes and supports organizations that serve as a resource to the diverse adoptee community; creates more awareness of the adoption experience, and inspires the next generation of adoptees to achieve their dreams and goals.