Vincent Sylvan, the first author to ever create a precise formula using astrological influences as a guidepost for finding one’s soulmate, will be autographing, Find Your Soumate through Astrology at Book Expo America in the Jacob K. Javits Convention Center, NY, Wednesday May 26th from 9:30 to 10:30 am. 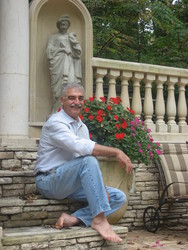 Sylvan finds the secret to his revelation. He creates a formula and that’s what the book is centered around. It is exciting because it is fresh material in this genre.

MMI Press will be presenting Vincent Sylvan, author of Find Your Soulmate through Astrology, at BookExpo America (BEA), in the Jacob K. Javits Convention Center, NY, on May 26th and 27th. He will be available in Writer's Row, booth 5067. Additionally, Sylvan will be featured in the autographing area on Wednesday, May 26th from 9:30 to 10:30 a.m.

“Sylvan is the first author to ever create a precise formula using astrological influences as a guidepost for finding one’s soul mate, and gives the reader action steps on how to narrow their search along the way. These are methods the author has tested and applied himself on his own quest in finding his soul mate,” notes Anne Robertson, director of MMI Press.

More than just a ‘how to’ book, Find Your Soul Mate through Astrology is a compelling read that takes you on a journey through the author’s quest to find out the meaning of life. Starting out in the small town near Valencia, Spain, traveling through France, and then Canada, until he arrives in America : the land with the siren call beckoning him to her shores. But for what purpose?

“After a marriage of convenience went sour and past the prime of my life, I had an awakening that I had not found the other half of my Soul, the one and only person in existence who can inspire me to be a better person and take me to greater heights than I could have ever dream of by myself or with any other woman,” comments Sylvan.

“Sylvan finds the secret to his revelation. He creates a formula and that’s what the book is centered around. It is exciting because it is fresh material in this genre,” notes Robertson.

Find Your Soul Mate through Astrology is the first title in Sylvan's ‘The Principia Series.’ Get What You Deserve and Prosper, the second title in the series, is expected to be released in first quarter, 2011.

In addition to the book, the audio recording Your Future Companion, by Master Hypnotist Stephanie Conkle, from the Clear Life Goals series will be featured in the MMI Press booth.

“This hypnotic recording puts listeners into a light state of trance freeing the mind and allowing subconscious ideas bubble up to the surface. Using creative visualization, the hypnotic writing activity puts their true desires in black and white before them, written in their own hand, so they are clear on what it is they really want to get out of life or call into their future. Once they have this information, they will have a clear direction for which path they need to take, and the subconscious and analytical mind can now work in tandem to speed up the process,” says Conkle.

Other guided meditations in this series include: Your Dream Job, Your Best Body, Your Dream Home, Your New Car, Your Wealth and Prosperity.

MMI Press, a division of Media Maniacs, Inc., is a global publishing and entertainment company that offers printed books, digital books, audio media and video entertainment products to retailers, libraries, and educational institutions. Headquartered in Gainesville, GA, the company was founded in 2009.

Find Your Soulmate through AstrologyBook cover