Baltimore Musicians Release Mobtown Moon, a Unique Interpretation of Pink Floyd's The Dark Side of the Moon, for Its 40th Anniversary

Two ambitious co-producers corralled over 40 talented Baltimore musicians to create Mobtown Moon, a CD tribute to Pink Floyd's classic progressive rock album, The Dark Side of the Moon. The album, which releases May 7, features unexpected instrumentation, rhythms, and sounds, showcasing the depth and diversity of Baltimore's creative musician community. 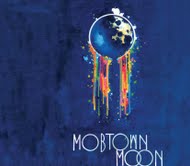 “As singer-songwriters,
ellen and I wanted to pull the music out of its stadium-rock context and focus on Roger
Waters’ great lyrics and melodies,” Asirvatham says.

Home of The Wire, John Waters, and groundbreaking artists like Dan Deacon and Animal Collective, Baltimore has spawned another visionary creative project. Mobtown Moon is a beautiful new version of Pink Floyd's album The Dark Side of the Moon, performed and recorded by dozens of musicians from many styles of music.

Songwriter and pianist Sandy Asirvatham reveals striking skills as the chief arranger and impresario of the project. The album was co-produced by Emmy-nominated recording artist ellen cherry and includes over 40 musicians. The album and associated concerts celebrate the 40th anniversary of the original best-selling rock record.

The overall vibe of the album is somewhere between jazz-fusion and classic progressive rock--with flashes of opera, hip-hop, electronica, and gospel layered in. The co-producers’ goal was to transform the original songs while honoring them. “As singer-songwriters, ellen and I wanted to pull the music out of its stadium-rock context and focus on Roger Waters’ great lyrics and melodies,” Asirvatham says.

The project showcases Baltimore as a distinctive cultural destination with a thriving arts scene. “This city is down-and-dirty but also intellectual, and just a very fertile place for collaboration,” cherry says. Many of the city’s best classical, folk, rock, and jazz musicians are given their due on this genre-busting album.

Instrumentalists were spotlighted along with singers. Bassoonist Bryan Young of world-renowned Poulenc Trio graces two tracks. Bass clarinetist Todd Marcus and other jazz heavyweights offer a bebop version of “Any Colour You Like.” (See the accompanying brochure for more track details.)

In a standout track, cherry sings a haunting interpretation of “Us and Them.” The native Texan
is a multi-instrumentalist, history buff, puppeteer, and seemingly tireless collaborator whose own original songs display uncommon intelligence and storytelling gifts. (She is on the mend after a car accident shortened her latest tour.)

Asirvatham plays piano and sings on several tracks. A respected writer and former Baltimore
City Paper columnist with a master’s degree in creative writing from Columbia University,
Asirvatham returned to her childhood musical roots about fifteen years ago. She enrolled in a
few semesters of jazz and classical piano study at Towson University in the early 2000s, honing
her chops further in camps, workshops, and fledgling professional gigs. She gradually
developed the deep ears and arranging skills that enable this substantial endeavor.

In May the new album goes on sale at CD Baby, Amazon, and iTunes. The full album will be
performed at Kraushaar Auditorium at Goucher College in Baltimore County, Maryland on
September 28. Touring shows are expected to follow.

A grant- and fan-funded venture, Mobtown Moon raised over $20,000 in donations in 2012 and continues to seek support through its current IndieGoGo campaign. Mobtown Moon is a fiscally sponsored project of Fractured Atlas, a nonprofit arts service organization.

Some of the Mobtown Moon recording artists in preview concert, September 2012.image by Alexandra Bull