Along with the best in the sport, America’s Cup champion and Oracle Team USA skipper James Spithill joins a sold out race featuring top paddleboarders from 15 countries, including stars from the worlds of surfing and television to compete in a 32-mile open-ocean race from the island of Molokai to the island of Oahu. 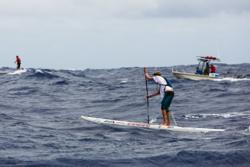 The Molokai-2-Oahu Paddleboard World Championships (M2O), presented by Kona Longboard Island Lager annually crowns world champions in the two disciplines of traditional (prone) and stand up paddleboarding (SUP). The endurance challenge represents the pinnacle achievement for paddlers around the world, looking to test their abilities in the sport. Race weekend updates and race day coverage will be fed to Facebook and Twitter at hash tag #M2O. Official start list can be found at Molokai2Oahu.com.

The 17th annual M2O on Sunday, July 28, 2013 is poised to display the most competitive race in the men’s SUP division that the event has ever experienced. The women’s SUP field features a record number of talented veterans who are capable of pushing the limits and delivering a close race.

Men’s defending champion Connor Baxter from the island of Maui returns this year after setting a course record of 4 hours, 13 minutes, 26 seconds in 2012. In addition to his speed on an unlimited SUP board, Baxter also holds the record as the youngest male champion in race history, claiming his first victory at 16. Now 18, Baxter will be tested by another young gun also from Maui, 20-year-old Kai Lenny.

Last year, Lenny proved he had the potential to become a champion at M2O after he crossed the channel in record time on a stock SUP board and still managed to finish third overall (4:22:14), just minutes behind his faster counterparts on unlimited boards. Racing this year on a sleeker UL board, there is no doubt Lenny will prove troublesome for the other top men.

Excitement from the coast of California came when news broke about Danny Ching’s entry into this year’s men’s SUP race. The 30-year-old Redondo Beach resident is currently considered America’s best SUP athlete, having won a flurry of events over the past two years. This will be Ching’s first attempt at the M2O championship. An accomplished OC-1 paddler and two-time Champion of the OC -1 Molokai race which covers the same course. Ching was the first Californian to win the coveted title and is keen to do the same at M2O.

Throw in top SUP athletes from Australia, Travis Grant, 30, and South Africa, Kimon dos Santos, 15, and the race could get tight when the paddlers round Oahu’s iconic China Wall toward the finish line. Grant has been close to Baxter in their European meetings. Dos Santos is the youngest paddler in the field; however, youth has proved beneficial in this race considering Baxter’s M2O championship at the age of 16.

Familiar faces make up the grouping of favorites in the women’s SUP race. Returning champion Talia Gangini-Decoite, 20, will defend her title after breaking former champion Andrea Moller’s win streak, while also setting a new women’s record of 4:55:02. Gangini-Decoite’s record also represents the first time a woman has finished under the five-hour mark in the SUP division. In fact, she smashed Moller’s former record (5:26:51) by more than 30 minutes under favorable conditions.

Moller, 33, is back. As reported by M2O founder Mike Takahashi, the powerful paddler and big wave surfer has been refocused on her training after completing her course work to become a paramedic, while also working full-time and raising a family. Moller convincingly snapped up repeat victories in 2010 and ’11, setting new course records in each win.

All women will need to look out for Annabel Anderson, 32, from New Zealand. Anderson is brining with her the momentum from a series of recent international victories.

Celebrities and surfing pros, past and present, join the SUP field this year:

•Oracle Team USA Skipper and America’s Cup Champion (2010) James Spithill, 33, from Australia is racing solo SUP in his first crossing of the Ka’iwi Channel. No boat, no crew - just a man and his board.

The story line for the men and women’s traditional paddleboard championship can be answered by asking one simple question - Can anyone beat the Australians?

Watching an Australian paddler on a traditional paddleboard is a textbook lesson in power and efficiency. That is why it will be difficult to unseat male and female defending champions Brad Gaul and Jordan Mercer. However, good competitors do not get complacent, especially when the closest competition for these two paddlers will come from fellow Australians.

Last year, Gaul fell about three minutes shy of former champ Jamie Mitchell’s course record of 4:40:31. The 34-year-old Gaul will start this year’s race with a new board he designed and is reported to be on a rigorous training regimen in preparation to defend his title, and perhaps set a new record.

Aussie Matt Poole could be a surprise in the men’s field this year. The 25-year-old has raced M2O on a team, so he knows what the channel can dish out. Poole has had several months to switch from Australian Ironman training to long-distance paddleboarding.

Brian Rocheleau who floated across the finish line in 5:01:49 tested English last year. In recent years, Rocheleau, a 37-year-old Oahu firefighter, has been the only American to consistently challenge the Australian athletes since they essentially took ownership of the division in 2001 after Aaron Bitmead’s win (5:29:01), followed by Jamie Mitchell’s string of 10 straight championships.

Some know her as “Jordie.” The M2O community knows her as the youngest overall champion in the field and current course record holder (5:22:31, 2011). At 19, Mercer looks unstoppable, but her bid for a third straight championship might be put in question by the entry of another 19-year-old and fellow competitor on the Australian Ironman series, Miranda Davies. This is Davies’ first M2O championship. Davies has experience in the channel having recently won the Surfski Championships on the same course earlier this year.

After claiming a legendary eight M2O championships and completing 12 consecutive crossings of the Molokai Channel, Kanesa Duncan-Seraphin will be missed from this year’s race while she enjoys time as a new mom with her family.

In the stock category, look out for the following athletes:

About the Molokai-2-Oahu Paddleboard World Championships

Founded in 1997, the Molokai-2-Oahu Paddleboard World Championships, presented by Kona Longboard Island Lager, is set to celebrate its 17th anniversary on Sunday, July 28, 2013. M2O has grown from a grassroots challenge for the legendary lifeguards and watermen of Oahu to the premiere event for the sport of paddleboarding, annually crowning world champions in the two disciplines of traditional (prone) and stand-up paddleboarding (SUP). The fastest athletes complete the crossing in less than five hours, which begins on Kaluakoi Beach on the north shore of Molokai and finishes in Maunalua Bay on the south shore of Oahu.