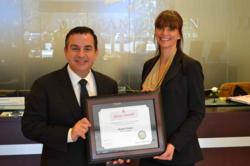 “We are humbled by the generosity of the many blood donors at Morgan Drexen who responded to our lifesaving call to action,” said Cliff Numark, CEO of the American Red Cross Blood Services.

Morgan Drexen employees are the collective recipients of the “Silver Award” presented by the American Red Cross. The award is given to organizations that achieve a minimum 20% year-over-year increase in the number of blood units donated. A blood drive held at Morgan Drexen headquarters in July, 2012, resulted in 41 units of blood collected, a 28% increase over the previous year. In total, the company has donated 110 units of blood since December 2011, enough to potentially save 330 lives! Morgan Drexen (http://morgandrexen.com) was among numerous local companies and organizations honored at a special ceremony held at the Marriott Irvine hotel.

“I’m very proud of our team,” said Walter Ledda, CEO of Morgan Drexen. “Time and again our employees come through to help those in need. The American Red Cross does amazing work, and to be recognized by such a fantastic organization is further testament to the generosity of our workers.”

Morgan Drexen is already poised to shatter last year’s impressive donation numbers in 2013. A blood drive held in January resulted in 37 units of blood collected, with every available time slot being filled by company employees. Another blood drive is currently being planned for this spring/summer, with a third blood drive being considered for the latter part of the year.

“We are humbled by the generosity of the many blood donors at Morgan Drexen who responded to our lifesaving call to action,” said Cliff Numark, CEO of the American Red Cross Blood Services. “The Red Cross is so appreciative for each and every selfless act of giving. Morgan Drexen’s employees truly do this out of the goodness of their hearts.”

Numark says every two seconds someone, somewhere in the United States needs a lifesaving blood transfusion.

“The only way to meet this need is through the continued generosity of volunteer blood donors,” says Numark.

In addition to working with the American Red Cross, Morgan Drexen partners with nearly a dozen other charities, both locally and nationally. They include the American Heart Association, Big Brothers Big Sisters, and the Orange County Rescue Mission.