Millions are being affected by foreclosures and joblessness. But keeping a roof over one's head can be accomplished in nearly two dozen innovative, even inexpensive or free ways. Housing and "simpler living" advocate Bill Seavey recently updated his manual "Home Dreams for Hard Times" to help mortgage mess and housing bubble victims across America. 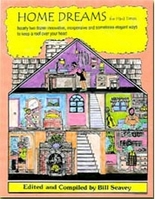 My updated manual encourages neither mortgaged ownership nor renting for some people -- and advocates for a return to a different American Dream...

Bill Seavey has been a program coordinator for a homeless outreach organization, a builder of "green" housing, and advocate for all kinds of innovative mortgage-free housing such as property care taking, apartment managing, home sharing and DIY construction.

When, in the mid 2000's, it seemed like everyone was getting low (or no) interest loans from banks and brokers (regardless of their ability to pay!) he went ahead with publication of the first edition of "Home Dreams for Hard Times," whose subtitle was "Nearly two dozen innovative, inexpensive and sometimes elegant ways to keep a roof over your head."

Well received by a number of reviewers, including an endorsement by Millard Fuller, the late Habitat for Humanity founder, it wasn't exactly a best seller. He eventually took down the website and even offered free manuals to homeless advocacy organizations -- remarkably, there were only a few takers.

Says Seavey: "Since original publication I've wondered if anyone in America really wanted a collection of rather inspiring, and admittedly sometimes eccentric, approaches to keeping a roof over your head. I know such information can be truly valuable since 10% or more of homeowners are at least three months behind in their payments, and even renting is starting to look like a reasonable alternative to home ownership.

"My updated manual encourages neither mortgaged ownership nor renting for some people -- and advocates for a return to a different American Dream -- that of truly responsible, debt-free ownership, home sharing, owner building, and various other low cost or even 'free' care taking strategies. In most cases I have personally experimented with everything I write about," he says.

Greener Pastures started with publication of a small catalog of "big city alternatives" which was sent first class mail for only $1 to anyone wishing a copy. Thousands were sold. His latest approach is similar, but postage and printing costs have necessitated a slight increase in price that shouldn't discourage even the neediest home seeker.

Information about the manual can be found at http://www.amortgagealternative.com (or send $4.95 to Crisis Response Publishing, P.O. Box 1681, Cambria, CA 93428).