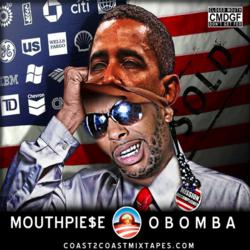 Mouthpie$e hails from Louisville, Kentucky but currently lives in Miami. Known by some as one of the hardest working indie artists, he is steadily making a name for himself in the music industry. To date, Mouthpie$e has released several mixtapes including “I Gotta Bomb” hosted by DJ Epps (G-Unit/Shadyville). The mixtape also features his Phighness Kings team. His last mixtape “Clo$ed Mouth Don’t Get Fed: The Appetizer,” was a compilation of various artists.

“Obomba” is the newest project from Mouthpie$e and was released on Election Day. The mixtape was pre-released exclusively on the Mouthpie$e Android app before becoming publicly available. The app allows fans to stream music, see pictures, and additional information about him. The app will be available on iPhones soon.

"This mixtape is for my people. I'm relating to the people with this one and speaking to the streets so it’s way more personal. This is my struggle. My hustle. My triumph over tragedy. These are the kind of success stories dreams are made of," says Mouthpie$e.

Keep up with all Mouthpie$e updates by following him on Twitter.