From Bieber & The Boatmen to Gangnam Style & The Buffalo Bills, Toronto Puts Itself on the Map for Sports, Leisure, & Entertainment in 2012

This week the Toronto Argonauts claimed the most Grey Cup wins in CFL history by winning its 16th championship in front of a home crowd at Roger’s Centre while one of the world’s most famous pop stars headlined halftime. In over two weeks the most viewed YouTube performer in history along with the NFL’s Buffalo Bills from across the bridge will enter the very same arena. Joe Crupi, owner of reputable GTA Movers, Bradford Moving & Storage, credits events like these in drawing new residents from across the country and border into the Toronto area and for Joe, that’s good business. 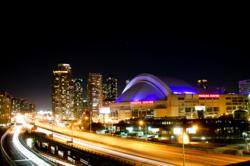 Toronto offers the best in metropolitan city life and households all over North America crave that experience.

November 28, 2012 (PRWEB) November 28, 2012 -- The CFL concluded its 2012 season this past Sunday in Toronto as the home team, the Toronto Argonauts (aka The Boatmen), took the title in a historic 100 year anniversary of the Grey Cup. They were the first team to ever win the Grey Cup and now they are the 100th. The halftime show, perhaps in an effort to compete with the intermission theatrics of the NFL counterpart Superbowl, showcased Ontario born global pop icon Justin Bieber. Bieber’s performance wasn’t exactly well accepted by the largely 40 something sold-out crowd in attendance but the move to bring in Bieber was a wise business move to boost ratings nonetheless. In an ironic follow up, in over two weeks the very same act that has knocked Justin Bieber off of the YouTube charts on November 25th 2012 as the most viewed YouTube video of all time, PSY of Gangnam Style fame, will take Bieber’s place on the Roger’s Centre stage as the halftime event of the NFL’s attempted inception into Canada for a game between the Seattle Seahawks and the American version of a Toronto home team – the Buffalo Bills.

This marriage between the NFL and a Canadian venue has some speculating that the NFL will make its move into the Toronto market soon. The Buffalo Bills Ralph Wilson Stadium currently receives almost 20% of its ticket sales from Toronto area residents so it appears that a market exists. For many sports fans across the country such a prospect is a welcome addition to its roster of Toronto area professional sport teams from the Toronto Blue Jays (MLB) to the Raptors (NBA) to the Maple Leafs (NHL) and the once again champions – the Argonauts (CFL). When you also factor in the fact that Toronto in addition to hosting an onslaught of concerts and world class entertainment throughout the year somehow manages to pack in the two biggest internet pop sensations (currently accounting for well over 1.6 billion worth of YouTube views) of all time within the span of three weeks, it’s safe to say that the city is stamping its place on the map of sports and entertainment. A lot of eyes are on Toronto and among them are households from across Canada and even across the border that place lifestyle and leisure high on their quality of life index.

Joe Crupi, owner of one of the long distance moving companies Canada turns to when undertaking an relocation to the Toronto area has been in the GTA moving and relocation industry long enough to know that demographic migration patterns emerge when Toronto is continuously brought to the forefront as the country’s epicenter of sports, leisure, and entertainment. Mr. Crupi states that certain households, such as single person units, young professional couples, and of course any individuals that work in the sports, leisure, and entertainment industries place Toronto at the top of their list of relocation possibilities. Joe Crupi comments “Toronto is the Rome of Canada. Even though Alberta gets the attention as an economic ‘boom town’ there is no question that Toronto is on the tip of the tongues of everyone when leisure & entertainment are mentioned in this country. Toronto offers the best in metropolitan city life and households all over North America crave that experience. We receive estimate requests from Vancouver Island to Nova Scotia from people moving to the GTA to take advantage of the lifestyle that could only be mentioned in the same breath as New York City, only with a preferred Canadian twist. We have even noticed an increased interest from our neighbors down south who are moving into luxury homes, long term vacation properties, and coming to take advantage of career opportunities in the aforementioned industries. As an unofficial liaison to the Greater Toronto Area, we are always happy to usher in new households by taking care of their possessions in transport”.

Bradford Moving & Storage encourages those across and outside of the country considering relocating to the Greater Toronto Area to contact their long distance GTA movers which manages nationwide, international, and overseas relocations to Toronto - the “Rome of Canada”.

Bradford Moving & Storage is a full service moving company covering the York region, including Newmarket, Bradford, Aurora, Keswick, Innisfil, Mount Albert and other towns as well as the north Greater Toronto Area. For 30 years we've been helping families and corporations with local, national and international moves. Readers of the York Region's largest newspaper, the Era-Banner, have voted us the "Best Movers in York Region" for 16 consecutive years.