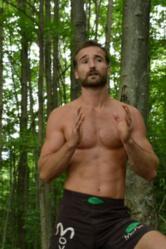 If you possess an intimate understanding of how the human body moves and can teach movement efficiency to your students, then you can set in motion a sustainable transformation in people's bodies and minds.

MovNat© announces the global launch of their fitness system trainer certification events, beginning in Santa Fe, NM on May 17, 2012, followed by an event in Durham, North Carolina; both events are sold out.

"If you possess an intimate understanding of how the human body moves and can teach movement efficiency to your students, then you can set in motion a sustainable transformation in people's bodies and minds," said MovNat founder, Erwan Le Corre. "As we teach people how to move skillfully, they reconnect to something profound in themselves. Exercise will not be seen or felt as a chore -- but as an experience to be enjoyed, as an opportunity to feel liberated and empowered. People will become hungry for more, and the way they move, perform, look, and feel will dramatically improve. This will be the beginning of a fitness re-revolution."

MovNat is a progressive physical fitness system that teaches participants how to move naturally with ease, power and grace to become fit, achieve a high-level of physical competency, and to be conditioned for any area of life.

MovNat is based on using the full range of our natural human movement abilities, such as walking, running, balancing, jumping, crawling, climbing, swimming, lifting, carrying, throwing, catching, and self-defense. MovNat is taught and practiced both indoors and outdoors.

MovNat has gained popularity over the last three years with 1- and 2-day workshops held in North America and around the world. In addition, they offer a 7-day workshop in Thailand and multiple 5-day workshops in West Virginia. A West Virginia workshop event will be featured on the Discovery Channel’s Daily Planet in July, 2012.

MovNat has received ongoing international media exposure with television appearances by founder, Erwan Le Corre, originally from France, who is living in Santa Fe, New Mexico. Le Corre and MovNat have been featured articles in publications such as Men’s Health, Men’s Fitness, The Washington Post, and the Smithsonian.

In January 2011, Outside magazine featured Le Corre and MovNat and ranked “Paleo-fitness” #1 of their Top 10 Health and Fitness Trends of 2010, with MovNat as the key force behind this movement. Le Corre has been called “one of the fittest men in the world” and a “fitness visionary” by Men’s Health magazine. He is acknowledged as a prominent expert in the field of evolutionary fitness.