The explosive popularity and controversy surrounding the download only album CalPOP "Best Record in the World" has resulted in it being banned from the Lala.com Web site. 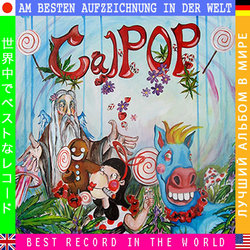 Best Record In The World

I wish our fans would settle down a little bit...but it really doesn't surprise me that people are talking about the record and enjoying it--that's the whole idea.

The explosive popularity and controversy surrounding the mp3 download-only album CalPOP "Best Record in the World" has resulted in it being banned from the Lala.com Web site.

"Fans were crazy for the concept album," says one Lala fan.

"It was the only thing anyone was talking about was how wild this record was…" says Jason Padilla, one Lala member.

"It seemed as though all the characters on the album had their own profile and they were all running around saying things that seemed like they were reenacting the album in the message blurbs--I saw Barley the Wonderhorse, Little Honka, The Ice Queen and Ginger Breadman--these are all characters on the album. It was like a Rocky Horror Picture Show movie audience," said Matt Corwin, another fan.

"Right before they banned it, I noticed that it was #25 on the Alternative charts--it was several thousand down last week...so the popularity was really getting crazy," says Padilla.

"There is so much controversial stuff about this record I don't know where to start! It has a missing song, it has frequencies of sound adults can't hear, it seems to have several languages going on with hidden messages, and if that wasn't enough--the whole thing is a concept album--like 'the Wall' by Pink Floyd--telling the story of an Internet hacker who sells his soul in order to win the heart of a fictitious rock star named Shelia Surrender. It really is crazy--and it's really big, too--takes about 90 minutes to hear the whole thing in your iPod," says John Wagner, another fan.

"'Missing Song' was really nuts if you ask me, because it was in the top 100 songs and yet it didn't exist! It was very funny! Because what does that say about your song if your song is BELOW the missing song? It means your song isn't even as good as one that doesn't even exist!" says John Bramlett.

The controversy surrounding this record is such that you have to really look around to buy all parts of it. Many etailers are refusing to make it available for one reason or another. Itunes.com and Amazon.com carry the first half of the album--but you now have to go to Shockhound or Rhapsody.com to get the second half.

Lala so far has had no comment about no longer making CalPOP's music available for sale and in banning certain CalPOP fans from being able to post blurbs, or comment, on Lala. CalPOP's lead singer, Lynn Tracy, only has this to say: "I wish our fans would settle down a little bit...but it really doesn't surprise me that people are talking about the record and enjoying it--that's the whole idea."