Music Choice to feature Avril Lavigne hosting a hot video list & a behind-the-scenes look at the making of her “Girlfriend” video. 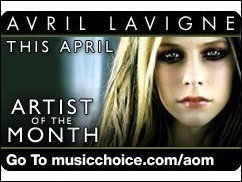 We are excited to partner with three of our biggest cable partners to promote our very popular Artist of the Month program, which garners an average of 6 million views a month, says Christina Tancredi, Executive Vice President of Music Choice.

Music Choice, the leading, multi-platform music network that reaches millions of music fans through their TVs, online, and cell phones, today announced that Avril Lavigne, the Grammy-nominated, Juno Award-winning singer/songwriter will be the featured ‘Artist of the Month’ in April on Music Choice On Demand, the No. 1 video-on-demand music service in the country. The Artist of the Month content includes a career-spanning collection of of Avril’s music videos to watch on demand, including “Girlfriend,” from her new album on RCA Records, “The Best Damn Thing,” hitting stores on April 17th. A mix of Original programs, along with compelling content that includes a three-part series on the making of Avril’s “Girlfriend” video, can also be viewed whenever – and however often – viewers would like throughout April.

"The Music Choice Artist of the Month program presents music fans with an opportunity to experience Avril Lavigne's music and to get to know the artist through unique programs," says Terry McBride, Founder & CEO of Nettwerk Productions. "We enjoyed working with Music Choice to develop a diverse promotional program for their video-on-demand service, showcasing the multiple talents of Avril Lavigne."

“Music Choice is excited to feature Avril, one of today’s most prolific pop singer/songwriters, and a top performing artist on our video-on-demand service, on our Artist of the Month program in April,” says Justin Prager, Director of Rock and Pop Programming for Music Choice. “Avril offers a true alternative to mainstream pop music; her music has matured with each of her hit albums. Music Choice is looking forward to adding to the Avril Lavigne fan base by offering compelling music content featuring Avril to the millions of music fans across the country with access to our network’s highly-acclaimed video-on-demand music service.”

Music Choice has partnered with Comcast, Time Warner Cable, and Cox, three of its cable partners, to promote Avril’s Artist of the Month content with local and national cross-channel spots across multiple networks. “We are excited to partner with three of our biggest cable partners to promote our very popular Artist of the Month program, which garners an average of 6 million views a month, says Christina Tancredi, Executive Vice President of Music Choice.”