Every year thousands of independent artists generate performing royalties that they are completely unaware of. Ditto Music have teamed up with Sentric Music to help their UK based artists claim PRS/MCPS revenue for gigs/digital sales and TV/radio airplay, and will be actively looking to place their music into TV and Film. 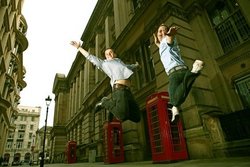 Lee and Matt Parsons started Ditto Music in 2007 and have have had 7 UK top 40 singles, all with unsigned artists

Whether its £6 for a tiny pub gig, or thousands for a festival appearance. Ditto Music will be helping independent artists collect their royalties.

For independent artists, selling music on digital sites like iTunes or Amazon has meant paying out 8% of gross on every sale to the MCPS/PRS For Music.

Unsigned artists are quite often unaware of this, meaning that an income stream that should be seen as essential can often go overlooked.

Ditto Music, the unsigned music distribution specialists have teamed up with Sentric Music to claim back royalties for thousands of their artists.

As well as claiming back extra digital revenue, artists will be able to claim back performance royalties for gigs, TV and radio airplay in some circumstances up to twelve months in the past.

As well as claiming PRS/MCPS royalties, Ditto will be working alongside Sentric to gain new sources of artist revenue through a brand new music promotion. Sentric have recently placed music into TV shows such as "The Hills" and "Paris Hiltons Best Friend" as well as TV adverts for brands such as Lexus. They will be working closely with Ditto to create new opportunities for artists, both financially and by way of exposure.

Lee Parsons of Ditto Music said ". Many artists are not aware that every time they sell music online or play a gig, they are owed performance royalties. Whether its £6 for a tiny pub gig, or thousands for a festival appearance, Ditto Music will be helping independent artists collect their royalties"

All UK artists are eligible for this special music promotion and if you have been selling your music through another distributor, you can now switch over and claim your royalties back for the last six months.

"We've known Ditto for years now and have always been impressed with how artist friendly they are so we're very happy to be working with them. Companies like Sentric and Ditto are showing there are genuine ways to make money from your music without signing your rights away" Simon Pursehouse - Sentric Music

About Ditto Music:
Established in 2005, Ditto Music is the largest independent distributor of digital, mobile, ringtone and video content, supplying over 700 stores worldwide. In 2007, Ditto was responsible for the first-ever UK top 40 single by an unsigned artist (Koopa). Since then, Ditto's distribution model has been posing a serious threat to the major labels. Ditto Music's roster includes My Vitriol, Lil Wayne, Sean Paul, Tupac Shakur, Finch, Samantha Fox, Gurrumul and Fairport Convention.