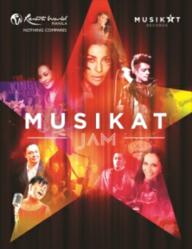 On June 4, bask in pure glamour with “All That Jazz!” Witness Jazz artists Bituin Escalante, Arthur Manuntag, Lynn Sherman, and Mel Villena light up the stage as they perform with the AMP Big Band and the Resorts World Manila Dancers at Taps, located inside the exclusive Genting Club.

On June 5, rekindle your passion for classical music as majestic arias come to life with “Best of Opera” at the Newport Performing Arts Theater. Listen to Noel Azcona, Adam Diegel, Arthur Espiritu, Andrew Fernando, Maria Rachelle Gerodias, Margarita Gomez-Giannelli, Cammille Lopez-Molina, Mako Nishimoto, Victoria Wefer, and Magdalena Wor and be prepared to be swept off your feet. Performing with them will be the ABS-CBN Philharmonic Orchestra under the baton of Maestro Gerard Salonga with Viva Voce, Nonon Baang and Fame Flores.

On June 6, experience a night of soulful music as Lani Misalucha amazes audiences in “One More Time”. Be moved by her lovely voice and engaging charisma at the Newport Performing Arts Theater.

On June 7, revel in the power and intensity of one of the country’s most influential rock artists in “Rock with Bamboo”. Experience Bamboo Mañalac's mesmerizing presence up close as takes the Newport Performing Arts Theater stage by storm with the Draybers Band.

Malaysian chart-topping singer-songwriter Eric Moo caps off the week on June 8 as he returns to Manila with his "Come Back to You" concert series, also at the Newport Performing Arts Theater.

Indeed, nothing compares to great music.