The best selling book, "Stop Wasting Your Wealth in Mutual Funds--Separate Managed Accounts: The Smart Alternative", promises a way out for 2008 mutual fund investors suffering up to 40% losses due to embedded vesting restrictions, excessive fees and high capital gains taxes. The book's solution: Get out of funds and build your wealth with a managed account. 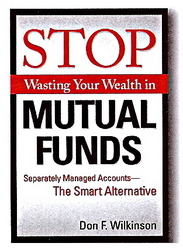 While an investor must accept his performance losses, excess fees and can't avoid paying capital gains taxes to Uncle Sam in 2008

The huge performance losses incurred by 2008 mutual fund investors has been intensified by a little known inclusion in most fund companies' prospectus keeping investors 100% invested in stocks.

"Fund companies write into their prospectus in complicated legalese that a particular fund will remain fully 100% invested in equities," says Don Wilkinson, wealth manager and author of the book, "Stop Wasting Your Wealth in Mutual Funds--Separate Managed Accounts: The Smart Alternative". "This means only equities will be considered for investment--no diversification that bonds, for instance, could offer. So in the 2008 down market, the fund managers had no flexibility or inclination to help investors."

The catalyst, says Wilkinson, was the 2008 Market including mutual funds, which logged its worst performance since Herbert Hoover was president. The DOW was down 36.2 % the biggest drop since l931. During the height of the Great Depression stocks were reeling at 40.9%.

Mutual funds, specifically, owned by 94 million Americans--half of the country's households, have been hit hardest, as poor performance returns were just a part of the equation. In addition to disastrous returns, high capital gains tax distributions have been or will be mailed soon to a great majority of mutual fund investors. The "January Surprise" has occurred routinely ever year for taxable mutual fund investors since the 2000-2002 downturn.

"It's absurd the whole idea of negative returns and paying taxes," remarked Wilkinson whose best selling book explains why mutual funds investors have to pay taxes in down market years.

"Don't blame it on your tax professional," says Wilkinson. "Mutual fund companies with their mandates of being fully 100% invested in equities create the environment which causes big losses in down markets."

Wilkinson, based with his own firm, DFW & Associates in Newport Beach, CA, has urged mutual fund investors to stop the mutual fund bleeding since 2006. His widely acclaimed book, "Stop Wasting Your Wealth in Mutual Funds…" has been endorsed by such financial icons as Ken Fisher, Forbes Magazine columnist and best selling financial author.

The third element of the whammy triad is the hidden trading costs, bloated commission structures, sales charges both seen and unseen, and pumped-up expense rations all driving up profitability for the fund companies at the expense of individual investors. As Ken Fisher mentioned in his monthly Forbes column endorsing "Stop Wasting Wealth in Mutual Funds: "I don't like funds. They lag market indexes, nick you with fees and run up unnecessary tax bills."

This year's insult to injury has caused many savvier investors to abandon mutual funds in droves. Two thousand and eight has been a record year of investors cashing out their mutual funds. In September, there was $75 billion worth of mutual fund redemptions. Unfortunately, for the buy and hold investors when people sell off funds, managers are forced to sell off positions to cover the requests. This is but another reason that leads to excessive capital gains taxes as detailed in the book.

"While an investor must accept his performance losses, excess fees and can't avoid paying capital gains taxes to Uncle Sam in 2008," wealth manager Wilkinson says, "a great way to decrease one's tax liability, obtain one fee transparency and potentially boost performance for is to get out of mutual funds and into managed accounts."

As the book covers in detail, SMAs and UMAs are asset management building portfolio strategies managed by independent money managers under an asset based fee transparent structure offered by financial advisors and other financial agencies.

The UMA because it fosters simplicity of design, it provides comprehensive investment management in a single account. It removes the need for more than one account (empties the mailbox) and combines all the assets with a single registration.

Best of all, the UMA possessing all the positive aspects of the traditional SMA, can also encompress most other alternative asset management vehicles (e.g.: stocks, bonds, ETFs and more) in a client's portfolio.

Investors can find all the details about UMAs and SMAs in Wilkinson's book: Stop Wasting Your Wealth in Mutual Funds…which can be found on Wilkinson's web site: http://www.wastingwealth.com. For the full text of this article link to the wastingwealth blog.

Visitors to the http://www.wastingweb.com Web site can also obtain a complimentary revealing report entitled, "Building Wealth with Separately Managed Accounts." Wilkinson's book can be ordered by phoning their office direct (800-288-7008) for a reduced rate or on Amazon.com: http://www.amazon.com/Stop-Wasting-WealthMutualFunds/dp/1419520180/ref=sr_1_1?ie=UTF8&s=books&qid=1228399379&sr=8-1.