How would you like to be 32% stronger in just 4 weeks? If that seems like a daunting goal, then you might be interested in a noteworthy study recently conducted by medical and physiology researchers in Miami, Florida and presented at a high-profile conference of the prestigious American College of Sports Medicine. Athletes participating in the 4-week, open-label study combined consumption of MyoZene™, a breakthrough specialized protein hydrolysate formula, with a 6-day split-body weight training program. The results, as documented in the study presentation, included increases in strength of 24% mid-study and 32% at study's end. This MyoZene™ study is the first study ever to show such profound increases. 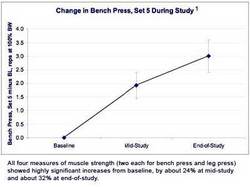 These results are truly impressive in a short period of time. It is clear BioQuest has done their homework. MyoZene™ represents a unique formula based on cutting edge science.

Scientific advancements tend to come in very small increments. If a new compound or technology or product can register even a tiny improvement over the status quo, scientists will be very happy. That's why, when a peer-reviewed clinical study presented at a major sports medicine conference links a specific breakthrough protein-and-creatine supplement to muscular endurance and strength increases as high as 32% over a mere four weeks, experts in the sports nutrition field stop everything and take notice.

In this widely celebrated case, the product is a highly advanced whey protein hydrolysate formula from BioQuest called MyoZene™. MyoZene's extraordinary muscle-building power appears to be driven by a unique specialized protein source hydrolyzed to such a high degree that it is absorbed directly into the bloodstream within minutes of consumption, igniting muscle synthesis and accelerating lean mass growth. The study's results--26% to 32% strength increases recorded via measurement of physical output in a series of upper-body and lower-body exercises over 4 weeks--were documented in a landmark study conducted by Dr. Douglas Kalman and associates and presented at a high-profile annual conference of the prestigious American College of Sports Medicine.

Needless to say, the presentation, held in an afternoon session on Friday, May 30th at the Indiana Convention Center in Indianapolis, drew widespread attention from doctors, researchers, and supplement manufacturers. Many in attendance, even those who were already familiar with MyoZene™ and its remarkable anabolic efficacy, were openly astonished at the results derived from the study. In the past, measured strength increases of 5% to 15% have been championed as considerable achievements. Increases of 26% to 32% are entirely without precedent.

The report (1), derived from a study conducted by a well-known pharmaceutical research firm and entitled "An Open Label Clinical Trial Evaluating the Effects of MyoZene™ with Resistance Training on Changes in Body Composition and Muscle Strength," utilized normal well-experienced weight lifters who were recruited to train using a program advocated by the American College of Sports Medicine for muscle gain (a hypertrophy program organized by the prominent researcher Dr. William Kraemer).

Each study participant underwent upper- and lower-body strength testing and body composition analysis, followed by a six-day-per-week split-body-part exercise routine. Test measurements included muscular strength/endurance and key markers of special interest to athletics coaches. Within the test's time frame (one month), the MyoZene™-receiving subject group gained 26% to 32% strength/muscular endurance. The MyoZene™-drinking subjects (ingesting one serving within 45 minutes of finishing the exercise session) also gained approximately 2.2 pounds of lean muscle within the month, while reducing some fat too. The increases in strength from baseline were 24% mid-study and 32% at study end. No safety concerns were noted in the study.

This electrifying study result represents a clear validation of recent research that suggests that ultra-rapid-action protein hydrolysates are necessary in shutting down catabolism and bolstering muscle anabolism in the extremely short muscle-building time-window after intense workouts. BioQuest's MyoZene™ has emerged as the gold standard among these rapid-action protein hydrolysates, based on the quality of its source, a hydrolyzed protein so highly processed it actually bypasses the normal digestion process and is absorbed directly into the bloodstream within minutes of consumption. Researchers theorize that this lightning-swift process allows critical amino acids to be transported to muscle tissue swiftly enough to impact muscle gene expression and ignite muscle synthesis. One such researcher, Jeff S. Volek PhD, RD, a widely respected Nutrition and Exercise Researcher at UConn, when asked for his comments on the groundbreaking MyoZene™ study, said "These results are truly impressive in a short period of time. It is clear BioQuest has done their homework. MyoZene™ represents a unique formula based on cutting edge science."

Even as this MyoZene™ study has become the talk of the American College of Sports Medicine's Indiana conference, top athletes are already making their preferences known with their purchasing decisions. Since its introduction in 2007, MyoZene™ has rapidly emerged as one of the most sought-after products in the quest for extreme muscle growth. Meanwhile, new clinical tests on MyoZene™ and its anabolic effects are planned for the immediate future.