A sell out success when they were first released, the ArmourDillo Google Nexus 4 cases have returned to stock exclusively at Mobile Fun. 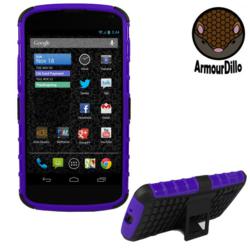 Mobile Fun, the UK's leading online retailer of mobile phone accessories are pleased to announce that they have received more stock of the Google Nexus 4 ArmourDillo cases, following their sell out success.

Exclusive to Mobile Fun, the Google Nexus 4 ArmourDillo cases offer complete protection to the Nexus 4 against daily bumps, drops, scrapes and scratches; therefore keeping the handset looking new and fresh out of the box for longer.

The ArmourDillo case for Nexus 4 is manufactured to have two layers of protection: the first layer being a tough polycarbonate shell which covers the vulnerable corners and sides of the Nexus 4, and the second layer being a textured skin which helps to improve the grip of the handset, preventing those butterfingers moments. The textured back and coloured accents of the case not only give character to the Nexus 4, but help to create an ergonomic shape which fits better in the hand, when using the Nexus 4.

One of the great features of the ArmourDillo cover for Nexus 4 is that it houses a built-in kickstand. This kickstand simply pops out when needed to dock the handset at the most comfortable angle for typing, swiping and streaming media. When it's no longer needed pop it back in and the flattened stand is flush with the rest of the case.

Made with the Nexus 4 in mind, the ArmourDillo case includes cut-outs to all the ports and features of the phone including the charging port, camera lens and headphone jack. This means that the phone doesn't need to be removed from the case in order to be charged, so it's always protected.

Expected to sell out again, the Google Nexus ArmourDillo case is available now from Mobile Fun in a variety of colours.

Mobile Fun has offices in the UK, USA, Germany, Spain and France and delivers products to over 50 countries worldwide

Mobile Fun were recently named the 'Best Accessory Retailer' 2012 at the What Mobile Awards and won the title of Online Retailer of the Year' at the Mobile News Awards 2012 for the second year running.