Clients in recovery at Narconon Arrowhead learn why addiction does not have to be a chronic problem and how the Narconon program helps them build a new, sober foundation for their futures. 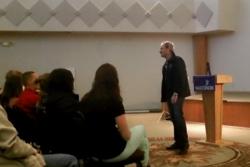 Most of these people were abusing at least four different drugs before they came to this rehab program. Fortunately for them, the Narconon drug rehab program is up to the task of helping even people with complex drug abuse patterns recover.

For thirty years, Bobby Wiggins has been delivering Narconon drug prevention lectures across the US and in countries like Australia, India, South Africa and the UK. In March 2013, he was invited to bring his experience and expertise to Narconon Arrowhead, a major drug rehabilitation center near McAlester, Oklahoma. In a presentation to Narconon Arrowhead staff and clients, he shed light on the many ways that the Narconon program enabled addicts to find lasting recovery for nearly fifty years.

In an evening meeting with the staff and clients – referred to as "students" as they are studying the skills to build a new, drug-free life – Mr. Wiggins instructed the students on a unique tool used to understand the different emotional levels people pass through. An addicted person passes through many emotions as he destroys his life with drugs – all in a downward direction. As a person recovers, he climbs back out of low, destructive emotional levels and into higher ones. An effective drug rehab program stabilizes this upward progression. Through this explanation, Mr. Wiggins oriented the students to the process they had already started when they arrived at Narconon Arrowhead.

He then briefed the students on his own history of recovery and how he turned his new sobriety into a platform to help others learn to stay sober. Mr. Wiggins has been instrumental in the development of the current Narconon drug prevention curriculum and has delivered drug prevention lectures to more than 900,000 individuals.

"Current drug abuse practices are actually far more dangerous today than when I needed recovery," he stated. "Most of these people were abusing at least four different drugs before they came to this rehab program. Fortunately for them, the Narconon drug rehab program is up to the task of helping even people with complex drug abuse patterns recover." Mr. Wiggins was referring to an informal, show-of-hands survey of the audience on how many drugs they were using on their arrival. About three-quarters of the audience responded that they were using four different drugs and a little less than half were abusing five. This dangerous practice greatly increases a person's chance of overdose death.

Mr. Wiggins wrapped up his presentation by clarifying for the students how the progression of counseling and life skills classes at Narconon Arrowhead will gradiently help them develop the sober-living abilities they need for lasting recovery.

"I went through this rehab program thirty-five years ago, and have dedicated my life to helping others avoid the same drug problems I had," concluded Mr. Wiggins. "I'm very happy to have been able to help these students envision their productive, sober futures more clearly. My hat is off to them for their determination to overcome their addictions."