Michael Adams, the Health Ranger has just announced his latest song that takes aim at Big Brother's X-rated airport pat-downs: "Don't Touch My Junk" is being released today as a free download at NaturalNews.com. 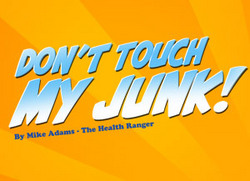 I Want My Bailout Money

The socially conscious rap artist who released the wildly popular "I Want My Bailout Money" song in 2008 has just announced his latest song that takes aim at Big Brother's X-rated airport pat-downs: "Don't Touch My Junk" is being released today as a free download at NaturalNews.com.

Created by Michael Adams (the "Health Ranger"), "Don't Touch My Junk" exposes the aggressive, obscene pat-down procedures now being used by the TSA on air travelers. The song is based on real dialog from traveler John Tyner who secretly recorded his conversation with TSA officials who tried to perform an "aggressive pat down" on him. He tells them, "Don't touch my junk, or I'll have you arrested."

Rapper Michael Adams, also the editor of the pro-health freedom website NaturalNews.com, incorporated those words into a clever rap song that puts a comedy spin on the issue while delivering a powerful pro-freedom message.

The song and video are available for free at: http://www.NaturalNews.com/music

The music video is also available at: http://www.NaturalNews.TV

"This song is about reminding people to invoke their Fourth Amendment rights against unreasonable searches," says Adams, who adds "airports are not Constitution-free zones."

The song, which is definitely not for children, features edgy lines about "man junk" and TSA molestation. It also borrows phrases from mainstream pop songs including "My Humps" (Black Eyed Peas) and "Don't Touch This" (MC Hammer). Popular radio host Alex Jones is also prominently mentioned in the song, along with the Fourth Amendment and the U.S. Bill of Rights.

Adams has emerged as a musically talented journalist-turned-rapper who achieved popular grassroots success with the recent release of his song and music video, "Just Say No to GMO" (http://naturalnews.tv/v.asp?v=B459FF2B150FDF4651302A60993D9CF3) which has achieved nearly 400,000 views across the 'net.

Adams, also known as the "Health Ranger," creates songs that capture popular sentiments about socially important causes such as civil rights, the psychiatric drugging of children and the safety of the national food supply. All his songs are offered as free MP3 downloads, and Adams earns no income or royalties from the songs.

"This song is about communicating an important message on civil liberties. Allowing our own government to finger our junk and molest our wives and children is irreconcilable with the liberties protected by the U.S. Constitution and its Bill of Rights," Adams says.