When Denver jeweler Elizabeth Pings sent her Black Spinel & Cultured Pearl Name Badge Necklaces to Beverly Hills for gifting to the press at GBK’s 2013 Oscars Gifting Suite, she was not sure how her efforts would pay off. But pay off they did with mentions in two Hollywood publications. 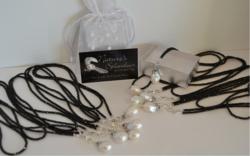 Used as a badge holder, this piece adds an elegant touch to any business or business casual outfit. Remove the badge; add the pearl pendant and you have a lovely piece of jewelry for an evening out.

When Denver-area jewelry designer Elizabeth Pings of Nature’s Splendour® (http://www.NaturesSplendour.com) sent her Black Spinel & Cultured Pearl Name Badge Necklaces to Beverly Hills for gifting to the press at GBK’s 2013 Oscars Gifting Suite, she was not sure how her efforts would pay off. But pay off they did with mentions in two Hollywood publications.

GBK’s 2013 Oscars Gifting Suite took place at The Sofitel Hotel on February 22-23. There, California-based The Artisan Group gifted handcrafted products from select members to celebrities and the press. Pings’ Black Spinel and Cultured Pearl Name Badge Holder Necklace was included in The Artisan Group Press Bags, which contained an array of items from jewelry to bath & spa products to fine art photography.

Pings created the 32-inch long name badge necklace using 3.5 mm faceted black spinels and a 20 mm long cultured, freshwater pearl pendant. The pendant is attached to the necklace with a sterling silver, heart-shaped lobster style clasp, which permits the owner to remove the pendant and add a badge or the other way around.

“I was inspired to create this piece when I needed a necklace to hold the badge for my business networking meeting,” remarked Pings. “I wanted something that would be versatile and express my love of Black Spinel. Used as a badge holder, this necklace is functional but elegant. Remove the badge, add the pearl pendant and you have a lovely piece of jewelry for an evening out.”

Pings has contributed to The Artisan Group giftings for the 2013 Golden Globe Awards, the 46th Annual CMA Awards, the 2012 American Music Awards, the 2012 Primetime Emmys and the 2012 MTV Movie Awards, among other projects. Pings knows celebrity gifting can be a great way to get the word out about her business, but admits obtaining attention from the press can be elusive.

So, Pings was thrilled when her Black Spinel Necklace Badge Holder Necklace was mentioned not only by "The Power Player Lifestyle," the online weekly produced by "The Power Player Magazine" but by media personality Karen Salkin, in her e-Zine, “It’s Not About Me.” Salkin called the necklace, “gorgeous,” while "Power Player" said Pings’ jewelry designs have, “eclectic visual appeal.”

“I was not surprised that my designs caught an eye or two, but I was pretty thrilled about it,” smiled Pings. “The exposure from the Oscars press gifting has been great for Nature’s Splendour.”

Pings is a graduate gemologist with a diploma from The Gemological Institute of America in Thailand. In creating her Nature’s Splendour jewelry, she meticulously handcrafts each piece using traditional hand knotting and wire wrapping techniques. The designs reflect her desire to create affordable, heirloom quality jewelry that offers an alternative to mass-produced designs.

Pings says her design inspiration comes from the stones themselves, which means no two pieces are exactly alike and can exhibit a range of styles. “I am definitely an eclectic designer and let the gemstones dictate the mood,” noted Pings. “I especially enjoy creating custom pieces and find some of my best work is the result of fulfilling customer requests.”

About Nature's Splendour by Elizabeth Pings
Nature’s Splendour® by Elizabeth Pings (http://www.NaturesSplendour.com) was established in 2005 by jewelry designer and graduate gemologist Elizabeth Pings. Traveling the world has opened Pings’ mind to many inspiring styles and designs. From the unequaled looks of the Far East to the elegant appeal of Europe, it all has its beauty.

The concept behind Nature's Splendour® is functional simplicity combined with eclectic visual appeal. Every piece of Nature’s Splendour handmade jewelry reflects this goal. From Cultured Freshwater Pearls, to natural gemstones in every color the rainbow, Pings can create the perfect custom piece for personal or gift giving needs.

Pings received her Gemologist degree from the Gemological Institute of America in Thailand. She is a member of the American Gem Trade Association and The Artisan Group, an exclusive, by invitation only group of artisans who collectively provide their handcrafted products to celebrities at Hollywood’s elite award show gift lounges.