Renault’s B-segment SUV is aggressively priced, easy on the eye and executes the ‘small on the outside, big on the inside’ ethos to perfection. It’s effortless to drive, too, with a conveniently high driving position. 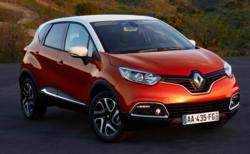 A starting price of £12,495 makes it a superb value option

Although impressivley efficient, the only diesel engine in the lineup feels weak with a noticeable absence of torque low down in the rev range. UK cars are only available with the dark interior trim and UK buyers will also have to wait until later in 2013 to have Renault’s excellent new dual clutch transmission on diesel models.

A starting price of £12,495 makes it a superb value option, especially with new cars deals available with AutoeBid. Although the MPV market has exploded over the past decade, the major carmakers are now hedging their bets on the mini-SUV, or compact crossover, segment. Designed to compete against cars like the MINI Countryman, Nissan Juke, Vauxhall Mokka and Peugeot 2008, the Captur aims to offer the space of an MPV with the high driving position and safety of an SUV, all in a car just 60mm longer than the new Clio IV.

Three downsized engines will be offered when order books open on May 1st; the range consists of two petrol engines - a 90hp and a 120hp - and an efficient diesel that also generates 90hp but emits just 95g/km CO2. That makes it the current best-in-class for emissions, and for a car the size of Captur to be exempt from London’s congestion charge is a major achievement.

Although buyers could never describe it as engaging, the Captur is nevertheless a fun car to drive and the combination of light steering and good visibility from the driver’s seat mean it’s easily maneuverable around town, too. Keyless entry and ignition are also convenient and add to the Captur’s ‘ready to go’ attitude that will make it easy to live with. A rear bench that can slide 160mm allows considerable increases in rear legroom and boot space, but not, alas, simultaneously.

The diesel and lesser petrol engines do an admirable job of shifting the Captur’s relatively light weight (its sub-1200kg kerb weight is comparable to a Clio III). Ultimately, however, they’re not quite powerful enough and regular downshifts combined with a lack of low down torque in the diesel mean that we’d go for the more powerful TCe 120 engine - preferably with Renault’s new EDC dual-clutch gearbox. So-equipped, the Captur feels more complete overall and the trade-off in fuel economy won’t be a major concern for all but the most frugal-minded drivers. All ‘Energy’-spec engines come with stop-start as standard.

Design has a big role to play on the Captur, and supple curves combined with an in vogue two-tone colour scheme (a £300 option) make it arguably the most desirable looking car in the segment. Three chief colour themes – ‘Arizona’, ‘Miami’ and ‘Manhattan’ – act as a basis for personalization, and the lower protective strips, grille/foglight surrounds and bootlid can all be specced in black, orange, ivory or chrome.

Step inside and it’s immediately clear that Renault has tried to give the Captur a fun ‘lifestyle accessory’ feel. As with the exterior, it’s all extensively customizable with different colour inserts available and even zipped-on seat covers, which cost £150 to replace in the event of an ‘accident’. The Captur, after all, will be bought predominantly by families. Importantly, interior quality is there, and the prominent infotainment system - that’s capable of reading out text messages and other such tricks - works well once one is familiarized with it.

Pronounced ‘capture’, the Captur makes a fairly compelling case for itself as a junior crossover. Renault says that it offers all the best attributes of an MPV, SUV and a hatchback, and they’re right for the most part. It’s spacious but surprisingly nimble with a small footprint, and cheap to run, great new car deals with AutoeBid as well as good looking. The overall package is excellent, and starting at £12,495 it’s going to take some beating. We can’t yet think where that might come from.