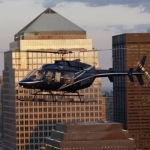 This popular tour offers not only the best views of the City, but includes the most popular New York attractions and landmarks.

“It’s exciting to get this positive feedback from our customers,” continues Westholm, “we strive for exceptional customer service, a flexible cancellation policy, and putting the safety of our customers first.”

Voted “Best Tour in NYC” by the Association of Hotel Concierges three years in a row, Helicopter New York City prides itself not only in an outstanding New York helicopter tour experience, but in their dedication to safety and customer satisfaction. Helicopter New York City uses only state-of-the-art, new helicopters with qualified FAA certified pilots providing an exhilarating once-in-a-lifetime tour experience that is specifically designed to be safe, dependable and fun.