Discover a fresh baked ham made with free-range Ibérico de Bellota pork from Spain at LaTienda.com. 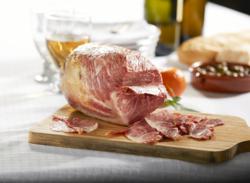 . . . an incredibly flavorful, juicy ham unlike any other

What if you took fresh free-range, acorn-fed Ibérico de Bellota pork imported from Spain and slow smoked it with hickory wood? La Tienda decided to find out, and ended up with an incredibly flavorful, juicy ham unlike any other. In partnership with Edwards of Surry, a Virginia smokehouse, they created a ham that can be baked and served as a spectacular centerpiece.

Following the tradition of 'lacón ahumada', LaTienda.com's new baked ham follows a recipe from Galicia, Spain, in which the ham is salted and smoked before cooking. After baking, the ham is served steaming hot with a loaf of crusty Galician bread, or diced and added to the traditional caldos (stews) of the region.

La Tienda's version is a lot like a deluxe version of fine delicatessen ham, with luxurious acorn-flavored marbling and a mouth watering smokiness. This Ibérico de Bellota cooked ham is mildly salty, much less so than a traditional Virginia ham. Leftovers make for amazing sandwiches.

Wandering the ancient range land, or dehesa, in southwestern Spain where they feast on acorns, herbs and grasses, Bellota grade Ibérico pigs are known as"the happiest pigs in the world." They live most of their lives roaming the countryside with their family group, sleeping under the stars in total contentment. This rich diet combined with constant exercise marbles the pork with beneficial fats that impart a heavenly flavor.

Ibérico de Bellota baked hams can be refrigerated for up to two weeks, or frozen immediately upon receipt for up to 60 days. Fully cooked, the ham may be sliced and served cold, or heated in the oven and served steaming hot.

Founded in 1996 by the Harris family, La Tienda is the leading online retailer of Spanish gourmet food, offering over 800 authentic products. Family-owned and managed, the business is dedicated to working with artisan and small family businesses in Spain.

La Tienda is headquartered in Williamsburg, Virginia, with its Spanish operation based outside of San Sebastian, Spain. Warehouses in Virginia and Alicante, Spain, ship throughout the United States, Puerto Rico, Canada, Europe and the UK. La Tienda shipped to over 100,000 customers in 2012, including restaurants and renowned chefs. Its first retail store opened in Williamsburg, VA in November of 2009.

In October of 2012, La Tienda co-founder Don Harris was awarded Spain’s Official Cross of the Order of Civil Merit by Ramón Gil-Casares, Ambassador of Spain to the United States, in recognition of Harris’ extraordinary services promoting the people, culture and foods of Spain in the United States.

www.LaTienda.comLogo of La Tienda - The Best of Spain