NewsWatch, a national television show broadcasting live from the floor of the 2013 Consumer Electronics Show, highlighted AppTheGame, an app that lets users get sports scores and stats instantly. 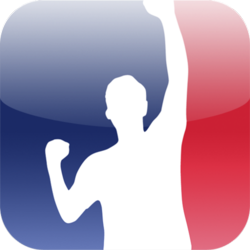 NewsWatch, a national television show broadcasting live from the floor of the 2013 Consumer Electronics Show, highlighted "App The Game", an app that lets users get sports scores and stats instantly.

AppTheGame lets you talk about your team, get news and stats, and compete in a head-to-head challenge system with other fans. But unlike other sports apps, the creators spent significant time creating a sleek mobile interface that’s both intuitive and useful. To get started, users must downloaded the app, login with their facebook account and begin playing. If users favorite their teams, they’ll receive push notifications on game starts and links to stats, scores, and ESPN’s game center. Within each team, there is a live stream that has social comments and articles from major publications like ESPN, Yahoo, and Bleacher Report.

If you love sports and want instant news and highlights, search AppTheGame on the iTunes Marketplace to start following your team today.

For more information, head to NewsWatchTV.com.

NewsWatch is a weekly 30-minute consumer oriented television show that airs on the ION Network Thursday mornings at 5:30am across the nation. NewsWatch regularly features top travel destinations, health tips, technology products, medical breakthroughs and entertainment news on the show. A recent addition to NewsWatch, AppWatch is a weekly segment that provides viewers app reviews and game reviews of the latest and hottest apps and games out on the market for iOS and Android devices. The show airs in 180 markets nationwide as well as all of the top 20 broadcast markets in the country, and is the preferred choice for Satellite Media Tour and Video News Release Distribution.