Lauren Conrad recently spoke on NewsWatch about her new "Got Milk" ad and joining the Milk Mustache Campaign. She is teaming up with 'DonateMyDress' and and the National Milk Mustache campaign to show teens that being healthy and looking good doesn't have to come from cosmetic boutiques and fashion racks. NewsWatch is the preferred choice for Video News Release distribution and Satellite Media Tour Distribution. 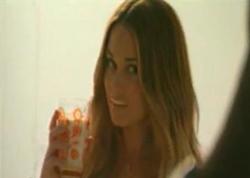 "I was very excited to be a part of the 'Body by Milk' campaign because I think things like lowfat milk are such an easy way to get calcium, protein, and all the nutrients that teens need."

Whether it's getting ready to look your best for prom or a regular day at school, Lauren Conrad wants teens to know that beauty doesn't always come from the cosmetic aisle or fashion racks. Lauren Conrad, star of "The Hills" and "Laguna Beach", has partnered with Donatemydress.org and the National Milk Mustache “got Milk?” campaign to help teens look good and feel healthy. Lauren Conrad is trying to show how making the right choices can help teens look and feel their best.

Lauren spoke with Newswatch about her "Got Milk" Campaign and why she is supporting this cause: "I think whatever you put into your body affects how you look and feel, and that's why I always try to make smarter choices like including milk in my overall diet." Lauren also spoke about her excitement with the new "Got Milk" campaign: "I was very excited to be a part of the 'Body by Milk' campaign because I think things like low fat milk are such an easy way to get calcium, protein and all the nutrients that teens need."

Lauren is asking teens to vote on her “Got Milk?” campaign and help her shape her milk mustache ad. For every vote the teens cast, one dollar will be donated toward Donatemydress.org, the first organization to help bring local dress donation organizations together from across the United States. Rebecca Wheeler, a 15 year old from Erie, Pennsylvania, is the one lucky voter who will get to help Lauren unveil her milk mustache ad at the Grove in Los Angeles. Lauren is joining hundreds of other actors, athletes and celebrities in supporting the 'Body by Milk' campaign and in supporting a healthier way of life for teens.

NewsWatch is one of the leaders in Video News Release distribution. Every NewsWatch show is broadcast to over 130 Million households nationwide and can be seen in virtually every market in the United States. NewswWatch also specializes in Satellite Media Tour Distribution and is designed to provide the widest possible exposure for each satellite media tour. NewsWatch has been on the air for over 20 years and has produced over 850 shows during that time.

In summary, NewsWatch airs on more than 55 full-power broadcast stations and can be seen in virtually every market in the U.S. Each edition of NewsWatch is aired more than 240 times, reaching more than 130 million households nationwide.

For more information about this episode of NewsWatch, please call 703-359-5480 or visit NewsWatchTV.com.