New York Yankees Hats, Jerseys Up to 20% off at SportsFanPlayground.com Beginning March 28

New York Yankees Hats and Jerseys will be marked down up to 20% off beginning on March 28 at SportsFanPlayground.com, the company recently announced. 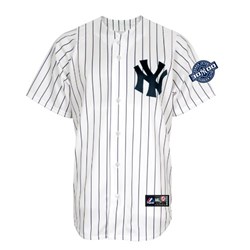 The New York Yankees Derek Jeter replica jersey with the 3,000th hit patch is available at SportsFanPlayground.com for $52.99.

The Sports Fan Playground (sportsfanplayground.com) has announced that the store will have markdowns on New York Yankees MLB sports apparel, including hats, t-shirts, jackets, jerseys and other top items up to 20% off of the retail price beginning March 28.

The store will have markdowns on classic Yankees sports memorabilia including signed baseballs, bats, helmets, jerseys and more from classic Yankees players including Derek Jeter, Mariano Rivera, Robinson Cano, Mickey Mantle, Babe Ruth, Lou Gehrig, Reggie Jackson and Joe DiMaggio. Many of the items available are marked down up to 30% off beginning March 28.

The Sports Fan Playground has a variety of Yankees DVDs and Blu-ray videos available for up to 60% off, including historical pieces on the history of the Yankees franchise, classic World Series championship videos, and the game that featured Derek Jeter's 3,000th career hit from July 9, 2011 against the Tampa Bay Rays.

The Sports Fan Playground has also expanded into electronics by carrying an extensive variety of video game products for the Xbox One and Playstation 4 consoles; high quality IT solutions from Cisco, Lenovo, Apple and others; Xbox 360 and Playstation 3 consoles, games and accessories; HDTV systems and accessories; DVDs and blu-ray titles from the NFL, MLB, UFC, WWE, NBA, NCAA and NHL; popular tablets from Apple, Amazon, Samsung, and Asus, and laptop computers from Apple, Sony, Samsung and more.

Along with the top sporting goods and electronics, the Sports Fan Playground has begun to carry a variety of shoes for men, women, and children from Nike, Adidas, Reebok, Converse and the Jordan brand, at low prices. To go along with the athletic shoes, the Playground offers deals on exercise and fitness products and accessories, including nutrition supplements, exercise equipment and popular exercise videos including the P90X and Insanity DVD sets.

The company recently launched a variety of specialty blogs that will be used to promote various sporting goods and electronics sales throughout the year, as well as speak on a variety of sports topics that are pertinent on a daily basis. The blog that is hosted on Blogger - The True Sports Fan (sportsfan1984.com) will be the sports opinion blog, and the Wordpress (sportsfanplayground.wordpress.com) will be used to announce the store's sales and promotions, as well as running special contests, taking polls and more.