Denver Broncos NFL Merchandise up to 70% off at SportsFanPlayground.com

Denver Broncos NFL merchandise is marked down up to 70% off of the retail price through the upcoming NFL Draft at SportsFanPlayground.com, the company announced on Thursday. 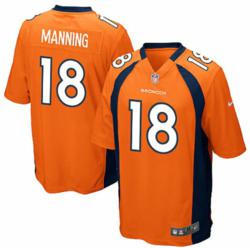 The Sports Fan Playground has a variety of Denver Broncos NFL merchandise marked down up to 70% off of the retail price through the completion of the upcoming 2013 NFL Draft.

Broncos NFL apparel marked down includes jerseys of top players including Peyton Manning, Eric Decker, Demarius Thomas, and Von Miller, among many others. The store has a variety of hats, t-shirts, sweatshirts, hoodies, home & garden products and many tailgating items available at low prices for a limited time.

The Broncos won the AFC West Division championship last season, going 13-3, before falling to the eventual Superbowl champion Baltimore Ravens in the NFL Divisional Round in one of the best playoff games in NFL history.

The Sports Fan Playground has an extensive collection of Denver Broncos NFL sports memorabilia available that celebrates the history of the organization, including signed jerseys, balls, hats, photos and other collectibles from John Elway, Jay Cutler, Bill Romanowski, Terrell Davis, and other prominent Broncos legends.

Along with the SportsFanPlayground.com website, the store also recently launched the new Development-shop.com website, which specializes in the sale of IT solutions for small business and enterprise companies, as well as consumers. Items available include modems, routers, switches, adapters, cables, computer cases, speakers, cooling fans, office products, furniture, laptop computers, desktop PCs, memory, memory cards, and more from companies such as Cisco, HP, Lenovo, Apple and others.